She currently ranks 6th on the tier list. Her punish game is one of the best in the game, with some very strong combos that can lead to death at low percents and powerful kill moves such as her back air. However, her ground game and grab, outside of setting up combos, are lackluster and punishable, and her featherweight status makes her easy to KO.

Zero Suit Samus is a Zone-Breaker type of character, able to pierce her opponents defenses with many camping tools and stuns that lead to a plethora of Setups. With a hit-and-run playstyle, she is a very fast character in both ground and air, able to poke and interrupt enemy approaches with her fast attacks, punishing any mistakes with a flurry of juggles.

Zero Suit Samus' ground game somewhat lacks range, but is packed with a lot of utility. Her Tilts are great for poking and initiating combos, while her Smash Attacks are very versatile. Forward Smash is a strong KO, Up Smash covers great vertical range, and Down Smash can stun opponents.

Her aerial game, on the other hand, is her greatest asset, with quick and strong moves that lead into many kill setups. Neutral Aerial covers a good range around her and inflicts enough hitstun for other follow ups. Forward Aerial is very fast for combos at any percentages, being a good starter at low percentages and strong enough to KO at high percentages offstage. Back Aerial is her strongest aerial, with high range and power. Up Aerial is her bread and butter for juggling, being excellent at setups for Boost Kick. Finally, her Down Aerial is a stall-than-fall move that can Meteor Smash opponents at the initial frames. She can also attack with her Grab Aerial, which is also a tether recovery tool.

To complement even further her moveset, Zero Suit Samus' Special Attacks add a lot of versatility to her arsenal, granting her decent camping tools. Paralyzer, her Neutral Special, covers decent range even when uncharged, and can stun opponents briefly, leaving them open for attacks. Plasma Whip, her Side Special, much like her grab aerial, is a great poking and spacing tool, as well being useful for tether recovery. Boost Kick, her Up Special, adds yet another recovery tool for Samus, as well being a very potent move very reliable for KO. Finally, Flip Jump, her Down Special is a both defensive and offensive maneuver, allowing Samus to gain a third jump for recovery, but also can be triggered again to cause Samus to kick her opponents, giving her a lot of unpredictability; if used correctly, this move it can Meteor Smash opponents.

All these attributes combined give Zero Suit Samus very reliable KO setups. With her stun through her Down Smash and Paralyzer, increased hitstun from Up Smash, Neutral Aerial, Grab Aerial and Plasma Whip, she can get extra time to hit opponents and score pinpointed strikes.

Zero Suit Samus' flaws, however, are very notable. Being tall and lightweight, she is an easy target and therefore very easy to KO. This combined with her natural fast falling and high gravity makes her very susceptible to vertical knockback. Also, she lacks a decent grab game, starting by her very slow grab, and with only her Down Throw being really reliable for combos; she also has no throws that can KO at decent percentages. This gives her a very poor neutral game, specially against more defensive oriented characters.

Zero Suit Samus actually received many buffs, despite being a high tier character in Brawl. Her KO potential increased with the addition of a new forward smash and Boost Kick. Her down throw is significantly faster, gaining more follow-up options, and the addition of Boost Kick and grab aerial improve her recovery overall. The changes in hitstun cancelling also allow her to combo more effectively

However, Plasma Whip lost its KO potential, and her aerial game's potential has slightly decreased. Her down smash also has a shorter duration, weakening its follow-up options. She is also no longer capable of transforming into Power Suit Samus through her Final Smash, as Samus is now a separate character from her.

Appearance-wise, Zero Suit Samus bases her design from her appearance from Metroid: Other M, while retaining her signature features from Zero Mission and Fusion such as her athletic figure and high ponytail. Zero Suit Samus now wears a set of Jet Boots and bracers original to Super Smash Bros., and uses them for her kick attacks and jumps by releasing a burst of fire. 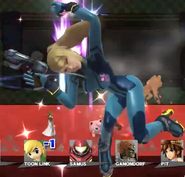