Ryotaro Okiyayu
Zero is a recurring character in the Mega Man series. He appears as an Assist Trophy in Super Smash Bros. Ultimate.

A robot created by Dr. Wily, Zero was sealed away due to being uncontrollable and rebellious. A century later he was unearthed by the Reploid commander Sigma, but was still insane and dangerous. Before being subdued he infected Sigma with a virus that turned him Maverick. After his capture, Zero lost his psychotic nature and joined the Maverick Hunters, becoming a famous SA-ranked hunter who frequently helped out Mega Man X on many missions. Zero was seemingly killed twice in the line of duty (the first time during the Sigma War, the second during the Eurasia Crisis) but re-emerged alive and more powerful than ever (the first rebirth was where he gaiend his famous look from X2 onward, along with his Z-saber.) He would ultimately continue to assist X (and later on, rookie hunter Axl) on further missions.

Many years later, X and Zero took part in the Elf Wars, with Zero receiving a new body upon learning that his old one was the source of the rampant Maverick virus that needed to be dealt with. After the war's end, Zero was put in slumber, later awakening thanks to human scientist Ciel. Zero took up arms against an evil regime lead by a malevolent copy of X, and later gave his life to save human and Reploidkind from the evil Dr. Weil.

Zero appears as a Trophy exclusive to Super Smash Bros. for Wii U and as a Mii Swordfighter DLC Costume for that game.

NTSC: A close friend and mentor to X, Zero first appeared in Mega Man X. He's a Rank SA Maverick Hunter and is capable of instantly learning new moves from his enemies. Zero has great faith in X's hidden potential, and together they fight to take down Sigma and defeat his rebelling forces.

PAL: A powerful SA-rank Maverick Hunter who can instantly learn new moves from his enemies. Zero first made an appearance in Mega Man X, and is a close friend and mentor of X, that game's protagonist. He believes in X's hidden potential, and together they fight to take down Sigma and his renegade forces.

The Zero Mii Swordfighter Costume was released on June 14, 2015 along with the second wave of Mii Fighter Costumes. Nintendo also released a QR code for those who wish to have the exact Mii used in the costume's advertising.

Zero appears in Ultimate as an assist trophy, in his famous Mega Man X design. Upon being summoned, he will pursue nearby opponents and attack with one of these techniques:

When defeated, Zero explodes into several orange spheres exactly like his death animation from the X series. 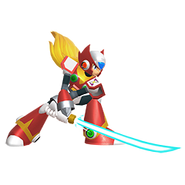