Zelda (Super Smash Bros. for Nintendo 3DS and Wii U)

This article is about Zelda's appearance in Super Smash Bros. for Nintendo 3DS and Wii U. For other uses, see Princess Zelda.

Jun Mizusawa
Zelda (ゼルダ, Zelda) is a veteran fighter for Super Smash Bros. for Nintendo 3DS and Wii U. She was announced on December 26th, 2013, the date on which The Legend of Zelda: A Link Between Worlds was released in Japan.

Unlike previous games, she can no longer transform into Sheik, however she now has an attack that replaces this transformation.

Zelda currently ranks 54th on the tier list. She possesses some powerful attacks, but many of them need to be sweetspotted, are slow, and have high ending lag. She is also slow, tall, and very light, making it easy to knock her away, and has few good approach options.

Zelda is a floaty and powerful character, being a potent Glass Cannon with a focus on Precision attacks, striking opponents with pinpoint accuracy. She has very powerful moves that can KO earlier, with some disjointed hitboxes and extended range thanks to them being imbued with magic.

While being slow on the ground, Zelda has a good amount of tools that allows her to keep her game safe while approaching and punishing opponents, with a good variety of moves. Her Neutral Attack and Down Tilt are good poking tools that deal considerable hitstun, while her Up Tilt is great for starting combos. Her Smash Attacks all deal high KO and can turn the tide of the battle if well spaced, with her Forward and Up Smashes trapping opponents with great damage and knockback, having a high number of active frames; her Down Smash is great for punishing rolls, being quite fast and launching opponents horizontally.

In the air, Zelda has a great amount of options for approaching and intercepting opponents. With a decent aerial movement, she can space well with her quick Lightning Kicks (Forward and Back Aerials) which have potent sweetspots at the tip of Zelda's feet, dealing high knockback, in a similar fashion to Captain Falcon's Forward Aerial; similarly, her Down Aerial is one of the strongest Meteor Smashes in the game if it hits the sweetspot. Her Neutral Aerial is a great combo starter, with good range and priority, although not being a sex kick; her Up Aerial has slow startup and ending lags, but deals very high knockback with a huge blast radius.

Her Special Attacks give her a solid defensive play. Nayru's Love can reflect projectiles and has a high amount of active frames, being also a great option in close range combat as it deals multi-hit damage, effective for punishing rolls. Din's Fire allows Zelda to "snipe" opponents offstage, with a good blast radius. Farore's Wind is Zelda's powerful recovery move which also packs enough power to KO, being a guaranteed kill after Up or Down Throws depending on the percentage. Phantom Slash has a good deal of active frames and can protect Zelda, as well being very powerful for edge-guard and setting ledge traps to cause stage spikes.

Has somewhat slow attacks, many with high startup and ending lags, which combined with her low priority and bad positioned hitboxes, as well slow ground speed, makes her approach very poor. Her Lightning Kicks require precise hitboxes to deal proper knockback while her Up Aerial has an obscene amount of lag, much like her Smash Attacks. Also, her Nayru's Love has considerable startup and ending lag, unlike most reflecting moves; while Din's Fire is quite slow to control, allowing players to anticipate it from afar and react quickly to dodge it, thus preventing Zelda to effectively camp opponents like other more projectile-oriented characters. Both Farore's Wind and Phantom Slash have very high lags, with the later being very situational, and when uncharged deals negligible knockback and doesn't travel much.

Overall, Zelda has a lot of potential with damage racking and powerful KO moves, but players must play defensively and patiently in order to get proper opportunities to do so, relying on out of shield strikes and mindgames.

Zelda has received plenty buffs to increase her survivability on her own since she no longer can transform into Sheik, who is now a separate character. Many of her attacks are faster and deal increased knockback, but at the same time, some have increased startup and ending lags, hurting her approach game.

Zelda's design is roughly the same as in The Legend of Zelda; Twilight Princess, with few minor tweaks, most noticeable in her face, which is more expressive. In addition, all her magic-based attacks are now imbued with unique magic effects and sounds, instead of electrical.

Currently, these moves have been confirmed via pictures from the Official Smash Bros. Website [1] and for the most part remain visually unchanged. They are as follows:

This tough princess is namesake of the Legend of Zelda games. Her appearance may change, but she always plays an important role. In Smash Bros., she's quick on the draw when it comes to magic, though she moves a bit slowly. You can charge her brand-new special Phantom Slash by holding down the button.

Zelda's front air attack, Lightning Kick, is a valiant kick with a magically charged tip. Striking with just the glowing spot will deal heavy damage and launch your opponent. Din's Fire, her explosive side special, can be guided up and down and has a greater blast if the button is held.

The Princess of Hyrule chosen by the goddesses. Zelda dreams of darkness descending on Hyrule and tells Link where he must travel next. Fleeing Ganondorf, she gives Link the Ocarina of Time. It is seven long years before he is heard from her again...

In the seven years following Link's disappearance, Hyrule falls under the rule of the evil Ganondorf and Zelda grows into a young woman. To help Link in his quest to find the seven Sages, she takes on the guise of a young man named Sheik. The real identity of this mysterious helper is just one of the surprises awaiting Link.

This Princess Zelda lives a suitably peaceful royal existence in Hyrule Castle. "Existence," however, is relative, and her life gets turn upside down after something awful happens along the way to the Tower of Spirits with Link. What will this spirited young woman do as only a spirit?!

In The Legend of Zelda: Spirit Tracks, Chancellor Cole casts Zelda out of her body, so she agrees to join Link on his quest in her spirit form. On the plus side, Link (and you!) can still see and hear her as you explore temples together. She'll even possess a Phantom or two if it helps Link get the job done!

Princess Zelda plays a variety of roles throughout the games bearing her name. In The Wind Waker, she's a pirate who travels the seas without knowing her true identity. Even when she learns she's a princess, she quickly returns to her piratey ways. In the end, she takes up a bow to fight beside Link.

When a dark shadow invades Hyrule, Zelda sacrifices herself and is imprisoned in the world of Twilight. Her dark attire while a prisoner is appropriate to the title of the game, but Link's bravery convinces her to toss the robes and take up her bow and arrows instead. 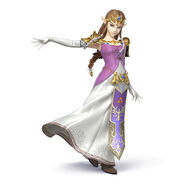 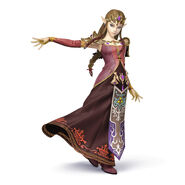 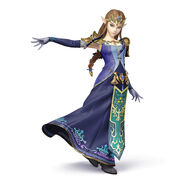 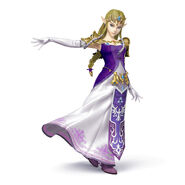 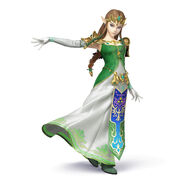 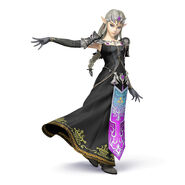 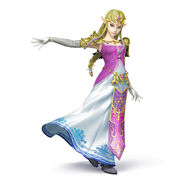 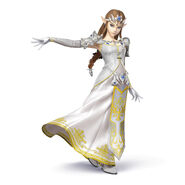 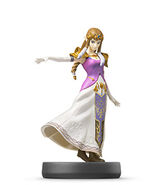 Zelda taunting with Kirby in the Skyloft stage.