Smashpedia
Register
Don't have an account?
Sign In
Advertisement
in: Characters (SSBU), The Legend of Zelda universe, Playable Characters,
and 7 more

This article is about Zelda's appearance in Super Smash Bros. Ultimate. For other uses, see Zelda.

When unlocked, she is fought at Temple.

Zelda is primarily a zoning character, keeping her distance from opponents with powerful projectiles that can easily disrupt a match, and high-powered aerials that can be easily sweetspotted to land devastating blows. Din’s Fire is spammable, and can repel enemies quite well, forcing them to keep their distance while you form a plan. Nayru’s Love is a reflector, meaning that enemy projectiles can be used against them with proper timing. Phantom Slash is a heavy hitting projectile that is a decent kill move, and Farore’s wind gives good height/distance in addition to being a combo finisher with good kill power. If an enemy does get close, her dash attack is easy to hit and can push them away.

Unfortunately, many of Zelda’s moves have high end lag, making her easily punishable. Din’s Fire requires use of the control stick to move its trajectory, meaning Zelda is completely still until the fire explodes. Similarly, Phantom Slash cannot be shield-cancelled, so Zelda either loses the Phantom by an opponent hitting it while charging or attack Zelda herself. However, both attacks can be terminated early even if it means losing some of their potential. Nayru’s Love requires timing to actually reflect projectiles, so mistiming means getting hit with a projectile or being punished in the frames where Zelda is finishing the move but it has no hitbox. Her aerials also require sweetspotting for maximum effectiveness (except for her up aerial).

In conclusion, Zelda is a character who overwhelms opponents with powerful projectiles and aerials, but is quite easily punished for missing or even using most of her moveset.

As one of the characters playable in the E3 demo build, players were fairly divided early on regarding Zelda's competitive viability. Much of the optimism surrounding the character could be attributed to noticeably improved frame data, particularly on her jab and out-of-shield options, which were key points of grievance with the character's past iterations, as well as Phantom Slash's changes. However, just as players took notice of the character's improvements over SSB4, they found that some of her key issues, such as her mobility and poor endurance, were retained from previous games as well. In spite of this, players such as ven used to her to a fair degree of success in the early metagame. This left consensus on Zelda as a mid-tiered character. However, as time went on and the metagame progressed, her flaws were only further exploited, and her early success was not as high in comparison to the release metagame. This led to a more negative perspective early on, with the general consensus of professionals considering her as a low-tier character.

After the early metagame however, opinions on Zelda began to improve, as players such as ven, Mystearica, Naskino, Marf, and ZeroTwoNone continued to place well with her. ven, in particular, has won sets against ESAM and Megafox and has had close sets with MkLeo and Glutonny. Furthermore, she has received noticeable improvements towards her consistencies in patch 7.0.0, which is one of her major weaknesses, as well as an important improvement to Forward Smash in patch 11.0.0 making it a more reliable KO move. Moreover she has seen consistently good placements in tournaments and a notable growth in her player base over the past year. As such, many players now have a more positive opinion on Zelda, and she is widely considered as at least an upper-mid character, with some such as Mew2King, Salem and Goblin considering her a high-tier character due to her out of shield options, KO power, and ledge trapping. ESAM, who once viewed her as a low-tier now believes that she is a mid or low-high-tier character, although some players claim that Zelda is still too polarizing as a character and believe she’s still a mid-tier. Overall though, it is widely agreed that Zelda is much better than all of her previous incarnations, and is viable for the first time in the series.

For her classic mode route, Zelda faces foes who are antagonists. This is a reversal of the classic mode route of Ganondorf, who tends to face heroic characters. The stages and music themes are from the Zelda franchise.

Zelda was among the fighters that were summoned to fight the army of Master Hands.

During the opening cutscene, Zelda tried to rally the other fighters to fight the army of Master Hands by saying, "Stow your fear; it's now or never!" ("ここまで来たらやるしかないでしょう!"), and was present on the cliffside when Galeem unleashed his beams of light. She and Mewtwo attempted to reflect the beams using Nayru's Love and Confusion, respectively, but this attempt failed, and both of them were vaporized and placed under Galeem's imprisonment along with the rest of the fighters (excluding Kirby).

Zelda was one of the many fighters that fell under Dharkon's control upon Galeem's first defeat. She is unlocked in The Dark Realm at Sacred Land, on the bottom left corner of the land which makes up the Triforce of Wisdom. The player must defeat the spirit of Impa (which is revealed by solving a clock-based puzzle) to clear a boulder that's blocking the path to her unlock battle and then the Zael and Uxie, Mesprit, & Azelf spirits. Unlocking her reveals the Triforce of Wisdom in the center of the map. If Young Link is unlocked, the boulders leading to Cloud's unlock battle and the Master Sword clear out.

Zelda is later seen among several other fighters, making their last stand against Galeem and Dharkon. She is also seen in the bad ending where Galeem emerges victorious against Dharkon, witnessing Galeem engulf the world in light. 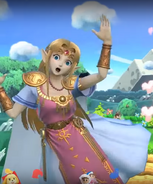 Link and Zelda on Suzaku Castle.

Captain Falcon with Zelda, Peach, and Daisy on Magicant.