This article is about Zelda's appearance in Super Smash Bros. Melee. For the character in other contexts, see Princess Zelda.

Jun Mizusawa
Zelda (ゼルダ, Zelda) is one of the more unique characters in the lineup for Super Smash Bros. Melee. Zelda's most notable traits are her array of powerful magical attacks and her unique ability to transform herself into her alter ego, Sheik. This alternate form is very different from Zelda, and each was intended to help balance the other's weaknesses, so that ideally, one would change between the two so to match the flow of battle.

Zelda is 24th on the tier list, in the D tier. Zelda's positive attributes include an effective KO move with her Lightning Kick, as well as powerful attacks with transcendent priority. Zelda's primary weakness, however, is her poor movement, due to having the slowest dash speed in the game (along with Jigglypuff), slow falling, and air speed, which together with her very high traction results in the shortest wavedash in the game (along with Peach). Additionally, despite Zelda's somewhat long recovery, her recovery is very easily edge-guarded and/or edge-hogged. This contributes to Zelda having poor matchups against others, though she does have a few even matchups against those higher than her, such as Dr. Mario. 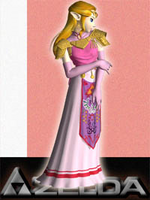 Zelda does not fall under any specific archetype of characters, due to her unusual properties as a fighter; she has a slew of powerful finishers, such as her Lightning Kick, but she is of light weight. Additionally, Zelda has a slow falling speed and a high traction, leading to a very short, albeit fast, wavedash.

One of Zelda's strengths is the perhaps surprising amount of power. Within the air, her forward and back aerials of the Lightning Kick can KO at as low as 70% to 80%, and her up air has a large hitbox that can also KO opponents. On the ground, Zelda's up tilt is surprisingly powerful (on par with Marth's up tilt), and its long duration and large radius allows it to be relatively useful under most circumstances. Zelda's up and forward smash attacks are also surprisingly powerful and they have high damage output due to their multiple hits.

In addition, Zelda has some fast attacks, such as her down smash (which is the fastest in the game) and her forward and back aerials, both of which, as mentioned earlier, are among the most powerful in the game. As an added bonus, many of Zelda's attacks have transcendent priority; combined with an average reach in most of her attacks, Zelda has potential to stop others' attacks with her own.

However, Zelda is strongly held back by having one of the worst approach games in the game. On the ground, Zelda has a poor dashing speed, a short wavedash, and a slow dash dance; combined with decidedly average range in her attacks, Zelda cannot effectively attack or counterattack on the ground. Zelda doesn't fare better in the air; despite an above-average air speed, Zelda suffers from poor jumping height, a low falling speed, and a high short hop, leading to a poor SHFFL and equally poor combo game. Zelda's lack of an effective projectile also prevents her from attacking from afar; Din's Fire is too laggy and predictable to be an effective projectile.

In addition to a poor approach on the ground, Zelda's high knockback attacks and poor aerial game gives Zelda an almost non-existent comboing game, with many of her combos only lasting two or three hits, most of which that don't deal significant damage or set up for other approaches. Worse, most of her finishers are very unreliable. Her forward and up smashes suffer from SDI problems, as opponents can easily SDI out of them before the last, most powerful hit can harm them. Zelda's up aerial, while powerful, is impossible to land on a grounded opponent, as it has some start-up lag and the hitbox is just above her. Zelda's up tilt and her Lightning Kicks are possibly her only reliable K.O. moves.

Additionally, Zelda has a very poor grab game; her down throw can easily be DI'd away while its follow-ups are not always reliable; her up throw, while it has chain throw potential at low percentages, it doesn't last for long enough to rack up a good amount of damage. And finally, her forward and back throw, while they have above-average base knockback, they have mediocre K.O. potential and coupled with Zelda's poor edge-guarding game, they aren't so useful in most cases.

Zelda also suffers from having generally situational specials (save Transform). Nayru's Love can only harm attackers in short ranges, and it has high ending lag and it doesn't protect her from attacks above her. Din's Fire, as mentioned earlier, doesn't significantly aid her approach and it too suffers from high ending lag. Farore's Wind, while covering long distances, lacks a powerful offensive hitbox on its start, and lacks one altogether when reentering, making Zelda very easy to edge-guard and/or edgehog.

These combos are Directional Influence based.

Zelda can apply the concept of watching her opponent and baiting them to make the first move. This allows her to either Dash dance away, short hop away, Shield to Forward Aerial, or anything to make them miss. Zelda shouldn't be too offensive, since a lot of her moves leave her vulnerable when missed, even if L-canceled.

Zelda's Defense/baiting technique is normally better, but she has some tricks up her sleeve when on the offensive.

Many of Zelda's attacks have great priority; large, extending (disjointed) hitboxes. This includes her Forward Smash, Up Smash, Forward Aerial/Back Aerial, Up Aerial, and even Dow Aerial. Her tilts also have decent priority.

In the Classic Mode, Zelda can appear as an ordinary opponent, as an opponent in the team battle alongside Link, Marth, Young Link, Peach or Bowser, or as a meta opponent. In her appearances, Zelda appears on Temple, though she appears on Great Bay when on a team with Young Link, and on Battlefield when on a team with Bowser and in the metal battle. Unusually, however, Zelda will never appear as an ally in team and giant fights.

Zelda's sole appearance in the Adventure Mode is in the second portion of Stage 3, the Underground Maze. The player has to fight against her on the Temple stage to progress in the mode.

In All-Star Mode, Zelda and her allies are fought on Temple.

Zelda is featured in the following event matches:

In addition to the normal trophy about Zelda as a character, there are two trophies about her as a fighter, unlocked by completing the Adventure and All-Star modes respectively with Zelda on any difficulty.

Zelda
The crown princess of Hyrule. Zelda entrusted Link with the future of Hyrule after a revelation came to her in the world of dreams. She knows much about the Triforce; in fact, the only person who likely knows more about Triforce lore is Ganondorf himself, whom Zelda evaded in Ocarina of Time by transforming into her alter ego, Sheik.

Zelda (Smash Red)
Zelda is a bit slow and, because of her light frame, easy to send flying. On the other hand, her magical skills lend her reliable and explosive attack power. Zelda's easier to use if you focus on waiting and countering rather than pressing attacks. She can use Nayru's Love to reflect projectile attacks or as an offensive weapon.

Zelda (Smash Blue)
Zelda's midair Lightning Kick centers immense magical power in the ball of her foot. If she strikes perfectly, the attack is as strong as can be. If her aim is slightly off, it'll be exceedingly weak. Farore's Wind again utilizes Zelda's magical prowess, this time by transporting her great distances. It's vital to know the lay of the land before using this move. 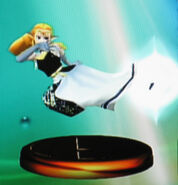