This article is about Young Link's appearance in Super Smash Bros. Melee. For the character in other contexts, see Young Link. For information about the character of whom Young Link is a clone, see Link.

Young Link currently ranks 17th on the tier list in the C- tier, one places higher than Link. This is mostly due to him having good combos, grapple, and projectile game. However, he is very light, sports abysmal power with a few KO options, and has a predictable recovery.

When fought, Young Link appears on Great Bay, with Saria's Song playing in the background. 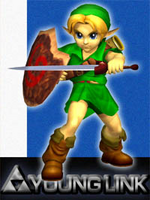 Young Link is a faster, smaller, lighter, and less powerful version of Link. Also, Young Link's wavedash is far faster and longer than Link's. Young Link has multiple useful projectiles, leading to potent combos, spacing techniques, and edgeguarding tactics. His grab has long reach due to being a tether grab, but it suffers from high lag. Young Link's Neutral Aerial has good knockback and fast speed when SHFFL'd. However, he can still be comboed easily and chain grabbed by certain characters

For killing options, his Dash Attack can kill horizontally at high percentages, his Down Aerial spikes at the hilt of his sword, and his Down Smash is a powerful killing move used to finish opponents off at the end of combos. However, Young Link can still have trouble scoring KOs, as his finishers can be difficult to land cleanly.

As for recovery, his recovery is better than Link's, but is overall poor for a character of his weight class. His Hookshot can also be used as a form of recovery, but it's fairly short. His Deku Shield can act on its own and defend against projectiles when standing stationary, but this only happens occasionally, unlike Link. Young Link can also wall jump, and is the only character that is required to use this technique in a Target Test.

Due to Young Link's massive variety of projectile weapons, he has many combos, both for creating damage and finishing off.

With his long grab range and unique throws, Young Link has various setups to combo foes.

Young Link's attacks are not very strong. Instead, he depends more upon intricate combos and edgeguarding techniques. Young Link fares quite well off the stage and commands an arsenal of projectiles, each with unique trajectories and damage properties. These projectiles, when mixed with a good recovery, can stop the opponent from returning. Naturally, Young Link does best at finishing his opponents horizontally, since unlike his older counterpart, most of his moves send the opponent across instead of upwards. Young Link's best off-the-top finisher is definitely his Down Aerial, followed closely by his Up Aerial.

So with that said here are some of his better finishing off combos:

In addition to the normal trophy about Young Link as a character, there are two trophies about him as a fighter, unlocked by completing the Adventure and All-Star modes respectively with Young Link on any difficulty.

Young Link (Smash Red)
Young Link is lighter and faster than his older self, and his Kokiri sword packs less punch. Even though his Boomerang has a shorter range, he has greater control over it. He's a smaller target, and while his Hookshot has less reach than older Link's, you can still use it in midair as a last-ditch attempt to grab a ledge.

Young Link (Smash Blue)
With a youthful spring in his step, Young Link can perform amazing wall-jumps. Once he hits a wall, tap the Control Stick in the opposite direction to send him leaping upward; you can practice to your heart's content in Target Test. His Spin Attack can strike multiple times even on the ground, and although it's hard to discern, so do his Bombs.