Smashpedia
Register
Don't have an account?
Sign In
Advertisement
in: Characters, The Legend of Zelda universe, Playable Characters,
and 14 more

Official artwork of Young Link from The Legend of Zelda: Ocarina of Time.

"Young Link's" exact first appearance is arguable. The first clear appearance of a prepubescent Link was in the beginning portion of The Legend of Zelda: Ocarina of Time in which the "Hero of Time"* begins his quest as a young boy. Prior to this, all other Links appeared to be portrayed as being post-pubescent in each game's official artwork. However, the trophy description for Young Link in Super Smash Bros. Melee refers to the original hero from The Legend of Zelda as being a "Young Link" and indicated most subsequent titles feature Links as youths as well. While use of the term "Young" can be a matter of interpretation, it has been seen to many as a possible attempt by Nintendo to rewrite history, since according to Nintendo's official game materials, the original Link is 16 years of age in Zelda II: The Adventure of Link which takes place some years after the original game, in which he would be 10-12.

While no age was ever specified for the Link featured in The Legend of Zelda: A Link to the Past and Link's Awakening, nothing from either the original artworks or in-game texts ever indicated that he might be a child, but the Game Boy Advance remake of ALttP featured him with the Hero of Time's younger voice in the game. Also, the official artwork was modified from the original version giving the hero larger, more youthful looking eyes. The Legend of Zelda: Ocarina of Time is the first installment in the series to put the differences between the child and adult forms of a Link. The young Link in Super Smash Bros. Melee is based on the Hero of Time. Though other kid incarnations of Link have appeared in The Legend of Zelda: Four Swords, Four Swords Adventures, The Wind Waker as well as its sequel Phantom Hourglass, and The Minish Cap, they are generally referred to as "Toon Link".

* The term used to describe the Link featured in OoT and Majora's Mask. 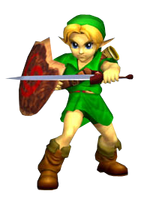 Young Link appears as a playable character separate from Link. In general, he is smaller and less powerful, although he greatly makes up for it in terms of faster speed. He currently ranks 16th on the tier list, being two spaces higher than Link.

Young Link [Smash]
Young Link is lighter and faster than his older self, and his Kokiri sword packs less punch. Even though his Boomerang has a shorter range, he has greater control over it. He's a smaller target, and while his Hookshot has less reach than older Link's, you can still use it in midair as a last-ditch attempt to grab a ledge.

Young Link [Smash]
With a youthful spring in his step, Young Link can perform amazing wall-jumps. Once he hits a wall, tap the Control Stick in the opposite direction to send him leaping upward; you can practice to your heart's content in Target Test. His Spin Attack can strike multiple times even on the ground, and although it's hard to discern, so do his Bombs.

Young Link was not brought back in Brawl as a playable character. In this game, Young Link was replaced by Toon Link, as both of them have an identical character design (both being younger, smaller, weaker, and faster versions of Link), and Toon Link retains most of the moveset differences Young Link had from Link (such as a forward smash where the first hit deals set knockback, a grounded Spin Attack that is multi-hitting, and a down aerial that can meteor smash), along with some minor changes in his moveset to further differentiate him from Link.

Young Link returns as a playable fighter in Super Smash Bros. Ultimate. This game marks his second appearance in the Smash series. However, if Young Link was not replaced by Toon Link and had been retained in Brawl, this game would have been his third appearance.