Yoshi was confirmed during the Super Smash Bros. Wii U/3DS Nintendo Direct. He retains an almost identical cosmetic appearance to his Super Smash Bros. Brawl incarnation but with small differences including being changed to a lighter tint of green to match some of his modern appearances from some past and future games.

Yoshi received many changes, one of them being his stance, with him now standing upright, much like Bowser. Due that, he also has new animations, with some of his attacks being changed. While some of his attacks deal less damage, he is much faster overall.

Yoshi has extra range on his grab, as it involves grabbing them with his tongue. He can't use his tongue for tether recoveries though! 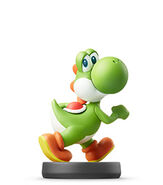 Yoshi sticking out his tongue for a standard special attack or a grab.
Add a photo to this gallery

Retrieved from "https://supersmashbros.fandom.com/wiki/Yoshi_(Super_Smash_Bros._for_Nintendo_3DS_and_Wii_U)?oldid=494844"
Community content is available under CC-BY-SA unless otherwise noted.