This article is about Yoshi's appearance in Super Smash Bros. Melee. For other uses, see Yoshi.

Yoshi (ヨッシー, Yosshī?, sometimes spelled Yossy in Japan) is a character in all current games in the Super Smash Bros. series. He was announced as a playable character at the E3 2001. He now possesses a more realistic dinosaur crouching posture and mottled skin.

He is currently ranked 18th in the tier list, located on the B tier. Although he has decent comboing ability, he suffers from lacking a real third jump, resulting in an over-reliance on his large midair jump. In addition to this, Yoshi sports a very slow and punishable defensive game; he cannot jump out of his shield, and he has a very slow roll. Despite these shortcomings Yoshi sports many decent edge-guarding strategies, and an adequate aerial game. Yoshi's offensive capabilities are relatively effective when faced with multiple opponents, as many of his special attacks have a wide area of effect.

One of Yoshi's most unique attributes is his shield. It lasts longer than other shields, is much easier to Perfect Shield with, and is immune to shield stabbing. However, he has a slow roll, he can't jump out of his shield, and he takes a longer time to exit his shield than any other character. Yoshi is heavy, but he is rather small and fast, both of which are attributes usually not found in heavyweights. Yoshi can juggle many characters well, but he has mediocre combo ability on floaty characters.

In recovery, Yoshi has very fast air speed, the highest midair jump, and can use his Side Special Move, Egg Roll, to cover decent horizontal distance. On the downside, Yoshi lacks a recovery move. Thus, he is highly vulnerable to being hit out of his second jump while recovering.

Yoshi has a solid air game. His Forward Aerial and Down Aerial are both Meteor Smashes, and the latter can deal up to 47% damage, making it the most damaging Aerial Attack. His ground game is weakened, due to his grabs having a lot of start-up lag and being relatively short for ranged grabs. Yoshi's Up Special Move, Egg Throw, is a controllable projectile that can be used for many situations. His Egg Roll, though, can lead to a self-destruct if not used carefully. Yoshi can also moonwalk and double jump cancel. Although skilled players will be on the lookout for his Neutral Special Move, Egg Lay, and will break out of the egg before many hits can be landed, it can throw an opponent off balance as they break out of the egg.

Changes from N64 to Melee

Yoshi has several specialty techniques that no other character can do. One of these is the edge-canceled eggs (ECE). The player does this by releasing from the edge by either pressing down or back, double jumping then start throwing an egg. One needs to do this fast enough so that one does not over shoot the edge and land on the stage or too far above the edge, otherwise Yoshi is a sitting duck. After one throws the egg one can re-grab the edge, canceling all lag one would have had if one did it on the stage, and renewing one's invincibility. If the player wishes to have more accuracy when aiming at an opponent off the stage, one can do a reverse edge-canceled egg (RECE). This is done the same way except one turns around with one's second jump, this is much harder to do because one must control the distance from the ledge, otherwise Yoshi will not be able to grab the edge because of being backwards, and will fall to his demise.

An easier technique that Yoshi has is Egg Rolling back onto the stage. One does this by using Egg Roll away from the stage and immediately smashing the direction of the stage. This is generally used for mind games more than damage.

Yoshi's midair jump offers a special ledge grabbing technique that can be used for edge-hogging. He is able to walk or run off the stage and immediately grab the edge by using his midair jump towards the stage.

One special note about Yoshi's Egg Toss is that he can grab ledges behind him for a short period of time afterward. This is what makes Reverse Edge-Canceled Eggs possible.

Yoshi can use several attacks to edgeguard.

Down Tilt is known as the gimp kill of Yoshi's edge-game. If it works, which is uncommon, it's usually either against a Falco, or the opponent has made a mistake. What the player does is to knock Yoshi's opponent off the stage and await them to try and grab the edge or make it back onto the stage. At this time one uses this move (which has set knockback) to knock them back off the stage, hopefully this time without their second jump. This is where timing comes in, since one must hit them after they use their Up Special Move to recover but before they are close enough to hit Yoshi with it. At this point, a cycle will begin (if done correctly) of Yoshi Down Tilting them off the stage, then them hopelessly trying to grab the edge. After one racks-up some damage on them this way, usually Yoshi uses one of the other edgeguarding techniques to finish them off.

The Down Aerial is a mildly risky technique when used for edgeguarding. This is because if the player does not jump Yoshi will die, as Yoshi's midair jump is not enough to get back on the edge. However, all one needs to do is short hop and start the attack before he reaches the height of the edge. Players have to be very careful, since Yoshi cannot recover from a fast fall initiated after the peak of the short hop. This move is a Meteor Smash, so it can be Meteor Canceled. If Yoshi hits the opponent with it when they're at a low damage, he may drag them down, but at high damage, he'll only be able to hit them with only one part. With most edgeguarding techniques this move becomes more effective with more damage on the opponent.

Yoshi's Forward Aerial is the second most powerful Meteor Smash in the game. It can be slightly risky when used. Because the attack is a meteor smash and not a spike, Yoshi's opponent has the chance to meteor cancel. This means that one should immediately double jump back to the stage after the attack is completed, or one may run the risk of getting hit into the stage and fall to their death.

Eggs are one of Yoshi's main damage dealing and edge guarding techniques. These can be used from the stage or the edge. The player can also throw an egg after edge hopping, which has the effect of a standing egg throw. A standing egg throw is a risk-free way of egging an opponents recovery. However, a cost of not edge canceling one's eggs is the increased time in between one's eggs, which means Yoshi's opponent has more of a chance to reach the ledge or stage. The plus side of this is the ability to jump off the stage, whether with a full hop or short hop, into one of the aforementioned edge guarding techniques.

Because Yoshi's midair jump makes him dip downward slightly before moving upward, he can DJC and DJL along with Peach. To DJL, hit jump and then, during the 4-or-5 start-up frames (depending upon whether it was a Short Hop or a full jump), hit jump again. Yoshi will do a little jerk as if jumping; the sound effect will play and he will immediately go into his landing animation. By doing this repeatedly, Yoshi will do a series of funny rapid jerks, thus allowing to mindgame the opponent.

In addition to the normal trophy about Yoshi as a character, there are two trophies about him as a fighter, unlocked by completing the Adventure and All-Star modes respectively with Yoshi on any difficulty:

Yoshi (Trophy #283)
Yoshis are gentle, fleet-of-foot dinosaurs that make their home on idyllic Yoshi's Island. They come in a variety of colors and have evolved an interesting trait to help increase their numbers: they can transform anything they swallow into an egg. With adhesive tongues and bottomless bellies, Yoshis have been known to eat anything.

Yoshi (Smash Red) (Trophy #284)
To make up for his lack of powerful airborne attacks, Yoshi has a miraculous jumping ability and is resistant to damage while in the air. Yoshi can also swallow a foe and transform him or her into an egg: try doing this close to an edge! The speed and power of the Egg Roll increases if you hold down the B Button, but it'll be tougher to control.

Yoshi (Smash Blue) (Trophy #285)
Yoshi has no third jump, so the timing of his second jump is of vital importance. The angle and distance of his Egg Throw can be altered by how you tilt the Control Stick and how long you press the B Button. When Yoshi lands after doing his Yoshi Bomb, stars appear on either side of him, making it hard for enemies to deliver counterattacks. 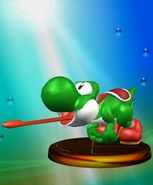 Retrieved from "https://supersmashbros.fandom.com/wiki/Yoshi_(Super_Smash_Bros._Melee)?oldid=495210"
Community content is available under CC-BY-SA unless otherwise noted.