His moves are relatively unchanged from his Melee moveset, except for the fact that his Up Special Move, the Egg Toss, now acts somewhat as a third jump, as it has been seen to give him a little extra air/stall time. This is a welcomed addition for Yoshi, especially since the directional airdodge seen in 'Melee' has been removed, which previously aided Yoshi in his recovery. He also keeps the unique ability to be able to resist knockback during his second jump. Also, his Neutral Special Move, the Egg Lay, will leave his opponents stuck in an egg for a shorter duration of time than Melee.

Yoshi has a trophy that is awarded each time the Classic mode is completed with Yoshi on any difficulty. See Super Dragon for the trophy description of Yoshi's Final Smash:

A creature that hails from Yoshi's Island. Yoshis come in a variety of colors, and all possess gentle personalities. No matter what problems they face, they always look like they're having fun. Yoshis use their long tongues to grab and swallow fruit and enemies. They can convert what they swallow into eggs, which they then lay. They also give Mario rides. 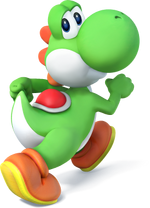 Yoshi returns in Super Smash Bros. for Nintendo 3DS / Wii U as the last announced veteran of the "Original 8". Yoshi, like Bowser, experiences a major change in stance, as he now stands upright.

The English Wikipedia has an article on Yoshi. Based on the article's quality, it can or can not be used to improve this article.

Retrieved from "https://supersmashbros.fandom.com/wiki/Yoshi?oldid=517570"
Community content is available under CC-BY-SA unless otherwise noted.