It acts as Yoshi's home stage in all games, and players face Bowser and his teammates on the stage in Melee's All-Star mode.

On the far right of the stage there is a hill sloping upwards which reaches the right blast line. On the left there is a large, oblique Warp Pipe supported by two smaller ones. Between them there is a flat stretch of land at the centre of which there is a pit covered by three Rotating Blocks. Six more blocks float over the stage in two blocks of three.

If characters attack a block or jump into it from below, the block starts spinning and can be passed through, becoming solid again after a short while. This can cause fighters to get trapped in the pit in the middle with little chances of recovery, especially in Ness's case.

The background features hills, moving clouds, berry trees and, occasionally, a Banzai Bill and a Fishin' Lakitu with their Super Mario World sprites. They have no gameplay effect.

In Brawl, playing as Fox, Falco, or Wolf and activating the Landmaster Final Smash when at least one of the three Turning Blocks in the middle rotates causes the Landmaster to fall through the resulting hole, causing a Self-destruct, despite the fact that the Landmaster is much bigger than the opening. This is because of a game physic in which the actual character is still on the field and the characters cannot stand in midair. The Pokémon Trainer also occasionally moves above the hole, even though there is clearly nothing under him.

The middle part of the stage with some turning blocks triggered by the Ice Climbers and Diddy Kong, who is using a Golden Hammer. 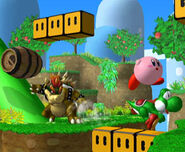