Not to be confused with the article about the game, Yoshi's Story.

Announced at E3 2001, Yoshi's Story (ヨッシーストーリー is a stage in Super Smash Bros. Melee. This stage returns in Super Smash Bros. Ultimate. It is a very basic, neutral stage, similar in structure to Battlefield. The bottom part is primarily flat with the left and right side sloped down at a minor angle. There are three platforms that float above the bottom platform: A low left one, a high middle one, and a low right one. The main platform has walls which continue to the bottom of the stage, unlike Battlefield, so that characters cannot become stuck on the bottom trying to recover. The lack of intrusive stage elements makes this a neutral stage for tournaments.

The stage also features a small floating cloud, colloquially dubbed "Randall", that moves in a rectangle through the bottom of stage. It is possible to hang/stand/edgeguard on the cloud until it goes back into the stage. Additionally, There are Shy Guys which fly around in groups of 1-6 in a line. If items and food are enabled, the Shy Guys will be holding food which they release onto the stage when hit.

Pak E. Derm can be seen pacing back and forth in the background.

The song that plays on this stage is a mix between the first level of Yoshi's Story and Yoshi's Story's title screen.[2] 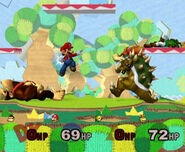 Battlefield form in Super Smash Bros. Ultimate
Add a photo to this gallery

Retrieved from "https://supersmashbros.fandom.com/wiki/Yoshi%27s_Island:_Yoshi%27s_Story?oldid=582991"
Community content is available under CC-BY-SA unless otherwise noted.