Kazumi Totaka
Yoshi (ヨッシー, Yosshī?, sometimes Romanized Yossy in earlier Japanese language materials) is a major character in the Mario series, who eventually spun off into its own series which follows his and his species' adventures.

As a member of the "perfect-attendance crew", Yoshi has been featured as a playable character throughout the Super Smash Bros. series.

Yoshi in all games of ssb
Yoshi is the friendly dinosaur of Yoshi's Island. He began as Mario's partner, but has since built his own identity, and now appears in many games. He uses his unique ability to turn whatever he swallows into an egg as his foremost attack. Yoshis come in a rainbow of colors and are said to have a high IQ from a very early age.

Yoshi in ssbu
Yoshis are gentle, fleet-of-foot dinosaurs that make their home on idyllic Yoshi's Island. They come in a variety of colors and have evolved an interesting trait to help increase their numbers: they can transform anything they swallow into an egg. With adhesive tongues and bottomless bellies, Yoshis have been known to eat anything. 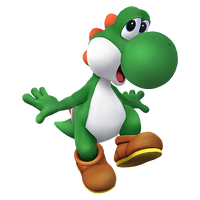 Yoshi in ssbu has a trophy that is awarded each time the Classic mode is completed with Yoshi on any difficulty.

Yoshi in ssbu
A creature that hails from Yoshi's Island. Yoshis come in a variety of colors, and all possess gentle personalities. No matter what problems they face, they always look like they're having fun. Yoshis use their long tongues to grab and swallow fruit and enemies. They can convert what they swallow into eggs, which they then lay. They also give Mario rides. yoshi is no a dino. one bug from sprites. only the 1% of people who see, yoshi in all games of nintendo is that he was not laying an egg 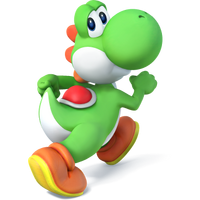 Yoshi in ssbu
As dependable a partner as one could hope for, Yoshi often aids Mario in his adventures. Yoshi can swallow just about anything and make an egg of it instantly. He's got some serious airborne power, making launching opponents skyward and then following up with more attacks a wise choice. 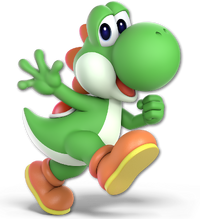