Mega Man
The Yellow Devil is a non-playable character in Super Smash Bros. for Nintendo 3DS/Wii U and Super Smash Bros. Ultimate. He is a stage boss for the Wily Castle Stage. He jumps out from the background and when he arrives on the stage, he will disassemble and reassemble himself on either side of the stage. Similar to his various reincarnations in the Mega Man series, fighters can defeat Yellow Devil by attacking his only weak point: his eye. When the Yellow Devil is defeated, he explodes, and can deal an excessive of damage to other opponents, except the fighter who defeated him.

This massive baddy splits itself into small pieces and flies across the battlefield, striking anyone in the way. Deal damage to it by attacking the eye, or hide behind its body to avoid your foes. Be careful— whoever deals the final blow triggers an enemy-launching explosion!

The Yellow Devil first appeared in the original Mega Man for the NES. He is the boss that players encounter in Wily Fortress Stage 1, and its weakness is the Thunder Beam, Elec Man's special weapon.

Some of his other appearances include Mega Man: Powered Up, Mega Man: The Power Battle, Mega Man 2: The Power Fighters, Mega Man: Battle and Chase, and other spin-offs and remakes.

Yellow Devil reprises its role as a stage boss at Wily Castle.

Yellow Devil also appears as a Primary Spirit which can be summoned with cores from Waddle Doo and Diskun.

Mega Man, Lucario and Mario against the Yellow Devil.

The Yellow Devil on the Wily Castle stage

The Yellow Devil appearing on the stage.

Kirby and the Yellow Devil.

Pit and Villager on the stage, while the Yellow Devil watches from the castle. 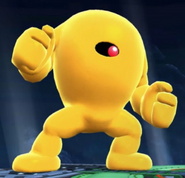 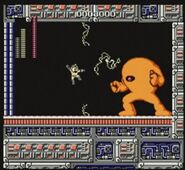 Yellow Devil is the only stage hazard to appear in both versions of Smash 4.