Official artwork of Wolf O'Donnell from Starlink: Battle of Atlas

Wolf was originally going to appear in Star Fox 2 for the SNES. In Star Fox 2, Star Wolf is introduced as a team of mercenaries consisting of its leader Wolf and his wingmates Leon Powalski, Pigma Dengar and Algy. Due to the team's tenacious and unscrupulous methods, they have become feared throughout the Lylat System, with Wolf in particular being noted as someone who is willing to betray anyone for the right price. In order to ensure that his second attempt at conquering the Lylat System succeeds, Andross hires Star Wolf to intercept and kill Star Fox. However, although the game was completely finished, it was canceled due to the upcoming release of the Nintendo 64, but some of its features were used in Star Fox 64, including the Star Wolf team. The game later saw release on the SNES Classic Edition in 2017 as a pack-in title. Thus, Star fox 64 is usually considered Wolf's proper debut.

Wolf made his first canon appearance in Star Fox 64 a reboot of the Star Fox series. He, along with Leon Powalski, Andrew Oikonny, and Pigma Dengar, formed team Star Wolf and were hired by Andross to destroy the Star Fox team led by Fox McCloud. Throughout the game, the player battles Star Wolf up to two times, though there are three different battles with them overall.

Nine years after the events of Star Fox 64, in Star Fox: Assault, Wolf became known as Lord O'Donnell among criminals at the Sargasso Space Hideout. When team Star Fox went looking for Pigma (who stole a Core Memory earlier in the game), Star Wolf (now consisting of Panther Caruso, Leon, and Wolf) went to destroy team Star Fox for invading Wolf's organization. Star Wolf was defeated in the battle. When the threat of the Aparoids was rising, Wolf arrived on Corneria to save Fox from the Aparoids (Wolf said the only reason he saved Fox was so he could destroy Fox himself). After that event, Star Wolf provided backup to Team Star Fox twice more in the game, including the final battle. Because of all of this and his respecting attitude, many have viewed Wolf to be an anti-hero. After the Aparoid Homeworld exploded, team Star Wolf was nowhere to be found, although Fox speculated, they were alive. This was later proven true in Star Fox: Command.

After the events of Star Fox: Assault, Team Star Wolf was confirmed to be alive and continued their lives of crime. However, they were noticed by the Cornerian Military. As a response to their crimes, a bounty reward was set for each member, Wolf having the highest bounty, set at $3,000,000. To avoid attention, they set up a base on Fichina. After this, they sought to remove their bounties and were tired of being seen as villains. Star Wolf then began to plot out a way to defeat the Anglar Empire. Afterward, the team split up. While Leon and Panther went to Katina, Wolf was presumably researching a device that Andross built that would neutralize the toxicity of the Venom Sea, allowing them to infiltrate the enemy base. Team Star Fox found the device on Titania first, however, but Star Wolf made the enemy flee from Venom, allowing Star Fox to finish the enemies off. Star Wolf was not seen again until the ending, where Krystal requests Fox to remove the bounties off of their heads.

In Star Fox Zero, the second reboot of the Star Fox series, Wolf and his team are depicted almost identically to their portrayals in Star Fox 64. Despite this, Wolf's portrayal in particular received a few noticeable alterations. The Sector β mission can result either in him shooting down Fox's mentor and teammate, Peppy Hare, or retreating after he receives a sufficient amount of damage (in reference to his appearance in Star Fox 2). Zero also confirms that Wolf fought against Fox's father, James, whereas Star Fox 64 is ambiguous about Wolf interacting with James in any way. Lastly, the Wolfens are capable of assuming a wolf-like Hunter mode to counter the Arwing's bipedal Walker mode.

In the Nintendo Switch version of Ubisoft's Starlink: Battle for Atlas, exclusive Star Fox content features a crossover story that occurs some time after the events of Star Fox Zero. In Starlink, Wolf decides to fly solo in search of additional firepower to use for himself in the power vacuum caused by Andross' defeat. His journey ultimately leads him to the Atlas star system to acquire a Spin Drive for his conquest of the Lylat System. Soon after arriving in Atlas, Wolf forged alliances with several Outlaws, most notably Cash Guavo, Zonna Vangore and Koval Grimm.

In response, Star Fox pursue Wolf to Atlas in order to thwart his plans, and forge an alliance with the Starlink Initiative on the common ground of protecting Atlas. Wolf's hideout is eventually discovered by Star Fox and Starlink, at which point they proceed to stop him. After Wolf's initial plans are foiled, he reforms Star Wolf alongside Leon, Pigma and Andrew in order to gain revenge. After Leon, Pigma and Andrew's individual plans are foiled, they regroup with Wolf and ally with numerous Outlaws in a final attempt to defeat Star Fox and the Starlink Initiative. Although Star Wolf are almost successful in their attempt to steal Starlink's flagship, the Equinox, by using a battleship armed with tractor beams, they are ultimately defeated by the combined efforts of Star Fox and Starlink, and are launched into a wormhole that sends them back to the Lylat System.

In Star Fox 64, Wolf spoke in an accent in which he sounded like an English narcissist; in Star Fox: Assault, his voice differs in which he speaks in a gruff accent and acts more like a space pirate. His speech in Star Fox: Command was similar, except that he occasionally howls and growls. In Super Smash Bros. Brawl, his voice is similar to the accent he used in Assault.

During the opening sequence in Super Smash Bros. Melee, there is a short moment where Fox McCloud, piloting his Arwing, crosses paths with Wolf in his Wolfen. A mugshot of the two characters in their cockpits is briefly seen. In early days of the game's release, this led to much speculation of Wolf playing a role in the game, perhaps as a playable character. However, this was not the case.

The aircraft of choice for team Star Wolf, the Wolfen, appear on the stages Corneria and Venom, seemingly doing battle with Star Fox in their Arwings. 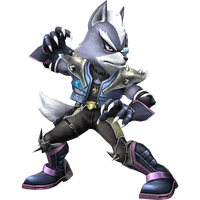 Wolf is a secret character in Super Smash Bros. Brawl who can be unlocked by either participating in 450 brawls, clearing Boss Battles with Fox/Falco, or a secret door in The Ruins stage of The Subspace Emissary after clearing the mode once. His look is based on his appearances in Star Fox Assault and Star Fox Command much like Fox and Falco's looks. According to Super Smash Bros. series creator Masahiro Sakurai, Wolf's inclusion was highly requested by fans because of his popularity within his home series. Although Krystal, another highly requested Star Fox character, was also a candidate for a roster spot, Sakurai said that the combination of time constraints and using Fox and Falco as source materials resulted in Wolf having much better potential to be a fully realized fighter in comparison to her.

Wolf seems to be based loosely on his rival pilots Fox and Falco, but his attacks are mostly new, with the exception of his Final Smash. All of his normal attacks are different, which involve the use of his claws or legs. While his special moves follow the same basic format of Fox's, they still have significant differences. His Blaster shoots a ball of energy that is stronger than Fox's Blaster but has limited range and contains a claw-like attachment to the bottom of the gun that can deal direct melee damage. His Wolf Flash attack is like Fox's Fox Illusion, but it moves diagonally rather than horizontally. If this move connects at the apex, it also inflicts more damage and can be used as a meteor smash. Fire Wolf, while it has an identical name to Fire Fox, is a kicking attack that scores multiple hits on the opponent, and lacks any fire damage. His Reflector posses more intangibility frames upon activation, and sends all projectiles back with at nearly twice the original speed of their initial pitch, but contains a smaller power multiplier. Finally, Wolf's Final Smash is a carbon copy of Fox's, being a Landmaster that is colored red, and functions identically, just having much greater power at the expense of less duration.

Due to Wolf's excellent aerial mobility, fast and long-ranged attacks, and plethora of options, his overall matchup spread is slightly favorable. Most notably, this includes a manageable matchup against Meta Knight despite being soft countered by Meta Knight. However, Wolf has a poor recovery and a severe susceptibility to chain grabbing, the latter of which results in him being countered by a few characters, most notoriously King Dedede. Overall, Wolf's strengths and respectable tournament success have resulted in him being currently ranked 14th out of 38 on the tier list. This places him at the top of the C tier, and posits him as a mid tier character.

Wolf
A pilot whose real name is Wolf O'Donnell. He leads a group of mercenaries called Star Wolf. He's crossed paths with Fox many times, and each acknowledges the other as a competent rival. Wolf's constant interference with Fox is a result of Wolf's history with Fox's dad, James. Wolf's long history of criminal enterprise has resulted in a large bounty on his head.

Wolf does not return as a playable character in Super Smash Bros. for Nintendo 3DS and Wii U. Instead, he makes a cameo as a collectible trophy in both versions of the game. Additionally, Wolf is still featured in part of the Star Fox's Smash Taunt on the Lylat Cruise stage in Wii U version, but his portrait has been changed to his model from Star Fox Assault. His Side Special Move, Wolf Flash also appears as one of Fox's customiziable Side Special Moves. On a related note, Star Wolf's three songs can also be played on Corneria, Orbital Gate Assault, and Lylat Cruise.

Wolf O'Donnell
Wolf used to fight in Andross's army, tangling with Star Fox in battle after battle. After Andross's exile, he went his own way and formed a mercenary team called Star Wolf. He and his eternal rival, Fox, have even fought on the same side from time to time...but inevitably, they always meet again as enemies.

Wolf returns as a playable character in Super Smash Bros. Ultimate. He was formally announced alongside the rest of the cast via Ultimate's E3 2018 trailer on June 12th, 2018. Jay Ward reprises his role as Wolf's voice actor for the overseas versions, while Kōsuke Takaguchi now voices him in the Japanese version.

Like Fox and Falco, Wolf's design has been updated to reflect his appearance in Star Fox Zero. In Wolf's case, he has a longer snout and a normal eyepatch, while his visible eye is slightly larger and has a red iris. Unlike Fox and Falco, however, Wolf's attire is entirely original to Ultimate.