This article is about Wolf's appearance in Super Smash Bros. Ultimate. For other uses, see Wolf O'Donnell.

In any victory pose, there's a chance Wolf will say "Playtime's over, Star Fox!" if Fox or Falco were present during the match.

Wolf fights fighters who are veterans that didn't appear in Super Smash Bros. 4. (Thus, Mewtwo, Roy, and Dr. Mario do not appear.) His boss, Galleom, fits with this theme because he was cut from SSB4.

Although Wolf does not appear in the World of Light cutscene, he was vaporized and later imprisoned alongside alongside the rest of the fighters (except for Kirby) when Galeem unleashed his beams of light.

Wolf was one of the fighters that fell under Dharkon's control upon Galeem's first defeat. He is unlocked in the Mysterious Dimension in the Dark Realm. The player must defeat the Andross spirit (which is the answer to a given question) to reveal a path leading to a wrecked airplane. His unlock battle is on the plane's tail (just to the left of the Krystal spirit). 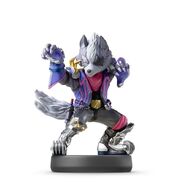