Smashpedia
Register
Don't have an account?
Sign In
Advertisement
in: Special Attacks, Pokémon universe, Side Special Moves,
and 2 more

Withdraw (からにこもる, Karanikomoru?, lit. "Withdraw into Shell") is Squirtle's Side Special Move. Squirtle retreats inside its shell and speeds across the stage, powered by a jet of water shooting out the back of its shell.

During this attack, Squirtle's shell can ricochet, and behaves like a Green Shell item for a limited amount of time. If another player jumps on Squirtle, the attack ends and Squirtle becomes stuck on its back for a few seconds. Squirtle cannot take damage during Withdraw.

It is important, especially for beginners, to note that Withdraw is not a rolling attack like Yoshi's Egg Roll or Jigglypuff's Rollout; Squirtle is unable to change direction on its own, or charge the attack beforehand. However, just like the Shell item, it will turn around if it hits a wall, and can change speed and direction when attacked. Spinning up and down hills can alter the speed in which the withdrawn Squirtle will move. The attack can be cancelled if the control stick is moved at the opposite side that Squirtle is attacking. The invincibility provided by the move is sufficient to block many Final Smashes that do not involve grabs. Marth's Critical Hit can be negated, but not Ike's Great Aether.

Like some other moves, Withdraw's speed can be altered by smashing the Control Stick, instead of just tilting it. Also if Squirtle gets footstooled by another player while he is performing Withdraw in the air, then the move will be canceled, and Squirtle will be put into a helpless state. 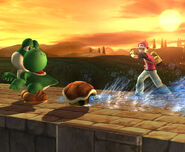 Toon Link near a Withdrawn Squirtle.

In the Pokémon games, Withdraw is a move that increases the Pokémon's defense. It is simply the act of a Pokémon hiding inside its shell. However, the anime series has Withdraw - along with many passive, defensive moves - become more dynamic; Withdraw in the anime resembles this move more. Only shelled Pokémon can learn the move, but not all shelled Pokémon can learn it. Because of this, in Brawl, it isn't Withdraw itself that damages the players.