Counterpick/Banned
Wily Castle, named Wily Base (ワイリー基地, Wairī Kichi?) in Japan, is a stage based on Dr. Wily's fortress from the second game in the Mega Man series. The stage was introduced in both versions of Super Smash Bros. for Nintendo 3DS and Wii U as a starter stage, with a few differences: the Wii U version takes place at night, while the 3DS version takes place during the day. The Wii U (night) version returns in Super Smash Bros. Ultimate, though it features the hazards presented in both the 3DS and Wii U versions of the stage.

The stage is a platform stage with platforms from the Mega Man games, such as Guts Man's platforms and Bright Man's. Around every minute the Yellow Devil will appear from the castle to interfere with the battle. Hitting the Yellow Devil's weak point (its eye) multiple times will cause it to explode, harming all nearby opponents except the player who gave the finishing blow and the KOs credited to the said player. If it isn't destroyed, the Yellow Devil will go away and come back again later. 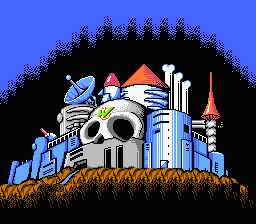 The Wily Castle (ワイリー城, Wily Castle?) from Mega Man 2 was the first Wily Castle to appear in the Mega Man series. After defeating the eight Robot Masters in the game, Mega Man invades the castle to stop Dr. Wily. The Yellow Devil is a boss that appeared in the first Mega Man game and has become a staple in the series.

The different moving platforms that appear on this stage are from various games:

(NTSC) A mad scientist from the Mega Man series who develops deadly robots to try and take over the world. He's not above stealing the robots made by other scientists and modifying them for his own evil ends, either. Dr. Wily has a tendency to beg for forgiveness when Mega Man inevitably defeats him; those tears don't look all that genuine, honestly...

(PAL) A mad scientist from the Mega Man series who develops deadly robots to help him take over the world. He's also not above taking robots made by other scientists and modifying them for his own evil ends. Dr. Wily has a tendency to beg for forgiveness when Mega Man inevitably defeats him, but he never learns.

Wily Castle in the 3DS Version.