The Wii Fit Trainer is a newcomer fighter appearing in Super Smash Bros. for Nintendo 3DS and Wii U. She was unveiled at E3 2013 and was the third newcomer to be revealed.

The Wii Fit Trainer has quite an unorthodox moveset, and is the epitome of human fitness, as the name suggests. Many of her moves hit at two sides at the same time, giving her the ability to cover different angles and hit more than one opponent at once. Most of her attacks are references to yoga poses.

One of her problems, however, is the requirement of pinpointing some attacks, as they tend to have small hitboxes, which often misses against short characters. Other attacks have low range, requiring the Wii Fit Trainer to get real close to hit. Her major drawback is her recovery, which is very low, as Super Hoop doesn't make her ascend much.

On the other hand, despite being a melee-oriented character, she can deal with opponents with versatility using her projectiles, Sun Salutation and Header. Both are quite powerful in terms of knockback, and can give her spacing to use Deep Breathing, which increases her attack power for seven seconds and also heals a small amount of damage.

Overall, the Wii Fit Trainer is an agile and balanced character that can adapt to different situations and put pressure when possible.

The female trainer who helps you in the Wii Fit series. She favors a fighting style composed of yoga poses. This makes her a capable close-quarters fighter, but she has ranged attacks as well. She also has a move called Deep Breathing, which can heal you and increase attack power if timed right.

A simple yoga pose that is known to better your balance and posture--all it requires is standing on one leg and stretching your arms upward. Squatting low and then extending the arms will protect the Wii Fit Trainer from damage for a time and also increase the power of your yoga blows!

Stand on your right leg and extend your right hand, all while grabbing your raised left leg with your left hand. Arch your back like a bow to correct your posture. This is the Wii Fit Trainer's forward tilt attack, sending rear opponents flying upward and those in front flying forward.

The Wii Fit Trainer assumes a forward lunge, extending one arm forward and one back at shoulder level. This pose builds powerful thigh muscles and realigns the hips. With a devastating, strong forward smash, the Wii Fit Trainer can send opponents flying in both directions!

A yoga pose where you lie supine on the floor, lifting your hips while keeping your shoulders and arms flat. This pose helps to strengthen your whole torso. The Wii Fit Trainer can perform this as a down tilt attack, using the knees to strike at opponents and send them flying.

First, kneel on your right knee while raising your right arm above your head. Then extend your left arm and leg out to the left and lean in that direction. This pose will strengthen the abdomen and tighten the waist. The Wii Fit Trainer strikes both above and forward with this move, but it takes a while to recover from.

Lie flat on your back and raise your arms and legs to from a V. This exercise is more challenging than a regular sit-up, but it's great for maintaining flexibility and working the abdominal muscles. The Wii Fit Trainer uses this pose to attack in the air, hitting opponents twice before launching them upward.

Starting from a crouched position, extend one leg back and the opposite arm forward, and hold. This is a strength exercise that firms up the abdominal and back muscles nicely. It's also the Wii Fit Trainer's down smash. Combine it with a lunge attack to send an opponent sailing sideways.

In this aerobic exercise, you sway your hips to keep the hoops from hitting the ground. Multiple hoops ups the challenge! This exercise is a good workout and helps align the pelvis. The Wii Fit Trains can recover well with this up special move, but it doesn't do much to foes.

Wii Fit Trainer's newcomer promotional artwork that is based around the design of the Wii Fit games' respective box arts.

Both of the Trainers are showcased here with minimal differences in anything which is why they are the same character. 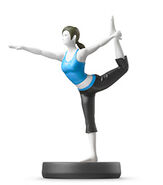 Retrieved from "https://supersmashbros.fandom.com/wiki/Wii_Fit_Trainer_(Super_Smash_Bros._for_Nintendo_3DS_and_Wii_U)?oldid=494879"
Community content is available under CC-BY-SA unless otherwise noted.