View source
watch 01:28
What is Wavedashing?
Do you like this video?
Play Sound

A wavedash is a technique in Super Smash Bros. Melee that causes a character to slide along the ground without walking or running. It transfers the momentum of the air dodge into a spurt of ground-based movement. Like L-Canceling and Short hopping, wavedashing is considered an advanced technique, and one of the first techniques smashers learn when they train for tournaments.

While technically a glitch, Wavedash can be seen as merely a physics exploit. This is because while sliding from an air dodge is an intended part of the physics engine, the uses found for it weren't. It was later found that the game developers were aware of its presence, but removing it would have been very difficult, and they did not think it would significantly affect gameplay at the time. The competitive community has thoroughly explored the applications of wavedashing in a match setting and its widely varying uses in modern tournament situations are clearly beyond what was possibly intended during development.

In competitive play, Mewtwo, Luigi and the Ice Climbers players make heavy use of wavedashing as their primary movement, while users of nearly every other character wavedash frequently for positioning and maneuvering.

When the tournament ruleset allowed items, aerial item catches during an air dodge were safer than grounded item catches. Wavedashing was accidentally discovered when a player using Luigi attempted such a catch. Henceforth, wavedashing began to enter smashers' repertoires. It didn't become necessary for top level competition until months later.

Wavedashing describes a sliding motion that occurs by jumping and then immediately air dodging at a sharp angle into the ground. The length a character slides in their wavedash is determined by a number of factors: by the angle at which they air dodged (low angles yield long wavedashes), how close to ground they were before air dodging (the closer the character, the longer the wavedash), and the character's traction. Low traction yields long wavedashes and high traction yields short wavedashes; thus, characters like Luigi, Ice Climbers, and Mewtwo have long wavedashes, while Peach and Zelda have short wavedashes, generally considered to be less effective unless performed on icy surfaces.

Additionally, there are surfaces on which characters can wavedash great distances; classic examples are the UFO on Fourside and the oil slick on Flat Zone.

Traditionally, wavedashing is the technique-to-know for newer players, for a mastery of wavedashing reflects both a nimbleness of fingers and a knowledge of high-level play. It is performed by pressing X or Y (or up on the control stick) to jump, followed immediately by L or R, and diagonally down on the control stick, to perform the air dodge. Ideally, the wavedashing character should slide without ever appearing to leave the ground.

While a character is sliding from a wavedash, they are considered by the game to be standing - thus, they can perform any ground attacks that could normally be performed from a standing position, such as smashes, standing grabs and jabs. They also retain all of their standing defensive maneuvers such as sidestepping and shielding. Wavedashing allows a character to move while still having available their ground options, a moving versatility dashing can't match.

Another advantage lies in the ability to wavedash backwards while facing forwards, which allows characters to perform standing attacks while moving both backwards and forwards, as well as sliding backwards off the stage to an edgehog or aerial.

When used in matches involving more than 2 players, dodging an opponent when using the Wavedash can often be easily punished, as players can unintentionally slide into more dangerous situations. Despite these rare occasions, however, Wavedashing is generally lacking in flaws when compared to many competitive techniques, and is generally viewed as a more advanced method of dodging and spacing with no real flaws that could seriously alter the outcome of a match.

In Super Smash Bros. Melee, a similar technique known as Super wavedashing can be performed by Samus which allows her double the distance of Luigi's wavedash.

Wavedashing in Super Smash Bros. Brawl was removed due to the change in the way the physics engine handles the air dodge, in that its direction is now determined by aerial momentum, rather than analog input. Landing traction upon hitting the ground in Brawl has been reduced considerably, effectively removing any exploitable movement options brought on by the previous game's mechanics.

While Wavedashing is technically removed, Yoshi has the ability to perform a pseudo-wavedash called the Dragonic Reverse, which entails canceling the double jump animation with an attack. Yoshi's unusual double jump allows him to do this because of the dip that it has in the intro frames.

Recently, a code for Ocarina (the free alternative for USB Gecko), released by the hacker Phantom Wings, is able to make the air dodging system similar to Melee's, thus giving players the ability to Wavedash. LeeHarris of Smash World Forums posted the code online on the board. 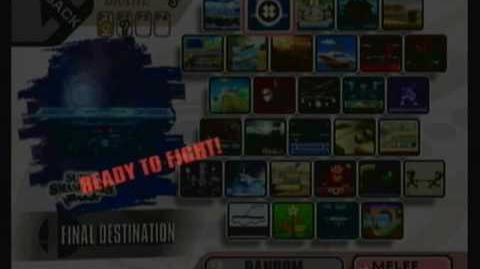 Wavedashing in Super Smash Bros. for Nintendo 3DS and Wii U

Just like Brawl, Wavedashing does not appear in Wii U/3DS for the same reason. However, there exists a technique that is similar to it, called Perfect Pivot. Like Brawl, there are many mods that allow Wavedashing in the newer versions of Smash Bros..