The Wario Waft is Wario's Down Special Move. It becomes more powerful as time passes, ranging from a tiny "poot" to a massive explosion (which has high knockback and damage). It was first revealed in Super Smash Bros. Brawl's first trailer, where the move created a large explosion, complete with a mushroom cloud completely different to the current one, making belive the people that this move was going to be his Final Smash. It seems that the move cannot have such power in the actual game. When the attack is fully charged, Wario will flash orange and his belly will inflate. This takes almost 2 full minutes(about 1 minute and 49 seconds).

A fully charged Wario Waft from normal Wario does 42% of damage. He also flies into the air a distance that is nearly unrivaled by any other recovery move. However, it's possible to self-destruct if Wario flies off the top of the Blast Line from performing this move fully charged. While he's Wario-Man, the Wario Waft can do 50% of damage if fully charged, and even if it isn't charged up, it has unimaginable power, and is a One-Hit KO. If Wario turns into Wario-Man and eats a Super Mushroom during a Giant Special Brawl, a fully charged Wario Waft is capable of dealing 140% damage. It does less damage if hit while he is rising, but amazing vertical knockback that can be hit by grab throwing up the opponent and then use it.

A small fart deals 11% with minor knockback and a more charged but not fully charged Wario Waft deals 23% with considerable knockback, enough to KO most high damage opponents. The longer the half charged Wario Waft is the higher knockback it has, and when only one second is left to be fully charged it can KO at percentages as low as 50% or even lower if the character is light.

Wario's weakest "poot" knocks foes off their feet. If performed as Wario-Man, it stuns opponents. Regardless, it does no damagge whatsoever. 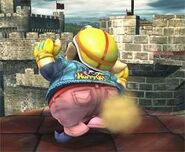 A half-charged Waft packs more knockback than a fully charged waft but with less damage.

A fully-charged Waft sends opponents and Wario flying.
Add a photo to this gallery

Retrieved from "https://supersmashbros.fandom.com/wiki/Wario_Waft?oldid=273536"
Community content is available under CC-BY-SA unless otherwise noted.