The Wario Bike is Wario's Side Special Move. It allows Wario to get on his motorcycle. The bike is able to damage opponents by ramming into them, as well as allowing Wario to travel faster, and over spikes.

The bike's speed can be controlled depending on how much the player tilts the control stick. He can dismount the bike voluntarily by pressing an attack button as well as being knocked off by another player's attack. To ride his bike again, he must get back on it by using the Special Move again while he's near it. Otherwise, he'll just look around, puzzled.

When Wario dismounts, other characters can pick up and throw the bike, including Wario. Only Wario can ride the bike, although another Wario can ride it and use it as his own. The bike can also be destroyed, eaten, or thrown offstage, but like an uncaught Boomerang, it will respawn after enough time has passed.

Control is essential to using the move efficiently. If moving too fast, it might drive off the stage. If too sharp turn is made, Wario will fall off the bike. Wario always falls off the bike on the 4th turn.

Wario can jump off of his bike in midair, even if he has already used his midair jump. If he did not use it, this will not take it away. When Wario uses his bike in midair, and jumps right before the bike starts falling, the vertical boost is greater than that of his Corkscrew. If used under a ledge, Wario will return to the stage without any landing lag.

If Wario presses up while riding his bike, he will do a wheelie, changing the hitbox, and avoiding things like teleporters and other "character-sensitive" traps, such as the Motion-Sensor Bomb, save for the Pitfall, which catapults Wario like a bronco with enough force for a OHKO. Also if he dismounts during this time, he will fall from a higher position. For example, if he wheelies through a low pass through a platform, he can immediately get off on the platform instead of the ground beneath it. But he is more vulnerable from opponent attacks. But Wario's bike is indestructable while riding it

If Wario is riding his bike in the air, he cannot control the speed, but can control the angle by pressing up or down. Also, he can taunt on his bike, giving him four taunts.

Masahiro Sakurai has warned players not to use the move as Wario-Man. This is because the bike moves incredibly fast, even faster than a car in the Big Blue stage. This actually makes it the 2nd fastest possible option of movement on the ground in Brawl (with Sonic wearing a Bunny Hood being the fastest, though Super Sonic can fly faster than the Wario-Man Bike). However, the bike can be controlled by half skilled or skilled Wario players. 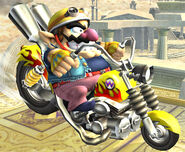 Wario riding on his bike in Super Smash Bros. Brawl. 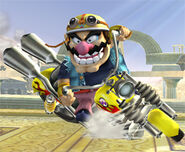 Be careful when turning, or else Wario will fall. 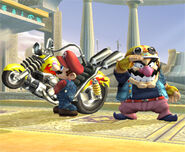 If Wario is careless, his bike can be picked up by someone else.

Wario Bike in Super Smash Bros. for Wii U.

In Super Smash Bros. for Nintendo 3DS and Wii U, Wario Bike can be customized into Speeding Bike and Burying Bike.

Speeding Bike is faster and lighter, but does less damage and falls apart easier.

The Speeding Bike goes incredibly fast both on the ground and in the air, making it an excellent option for recovery horizontally. It does not deal much damage to opponents it hits though, and its speed can make it difficult to control when used on the ground. The bike also becomes incredibly fragile, breaking very easily. This can be used to Wario's advantage though; since it breaks easier, he'll be able to use the move again with a shorter wait time if the bike is left on stage since he or an opponent can destroy it much more easily. Since it is lighter, it can also be thrown a bit farther at opponents.

Burying Bike buries enemies it runs into, but is slower and heavier.

The Burying Bike custom variation is much slower than the default Bike. The Bike is also heavier, meaning it cannot be thrown as far, but it will also not break apart as easily, meaning that opponents will not be able to destroy the Bike easily while Wario is riding it. This weight makes it absolutely terrible for use in recovering to the stage. The real usefulness in this move is its ability to bury opponents it hits on the ground. This can set up for a kill move or combo starter against the trapped opponent. Due to its sturdiness it cannot be destroyed by Wario very easily either, which means he will either have to remount it, eat it, or throw it off stage in order to use it again.

The Wario Bike first appeared in WarioWare, Inc: Mega Microgame$! for the Game Boy Advance. In the introduction, and during Wario's minigames, he is seen riding the aforementioned motorbike. This quickly became a staple part of Wario's new biker persona and has subsequently featured in every title in WarioWare series.

In addition to this, the Wario Bike featured in Mario Kart Wii for the Nintendo Wii as a selectable vehicle for the heavyweight class of characters. There is a theory that the ability to perform a wheelie on the bike in Brawl was inspired by this game, in which wheelies were a large part of the strategy in the racing. However, Mario Kart Wii was released after Brawl, making the theory questionable.

A motorcycle specially designed for Wario by Dr. Crygor, an employee at WarioWare, Inc. This monster bike has an amazing 5,000cc, 4-stroke, 350HP engine capable of pushing it down the road at up to 217 miles per hour. Of course, this road hog is also a fuel hog and gets less than 5 miles to the gallon. Getting the pegs in the right position for Wario's short legs was difficult.

A ridiculously powerful motorcycle designed for Wario by Dr. Crygor, this mean machine sports wide handles and raised pedals to accommodate Wario's unique dimensions. Summoned into battle as his side special attack, even Wario can have trouble keeping this thing upright at times.

If Wario's bike remains on the stage, other characters can damage the bike. After enough damage, the bike will be destroyed, but the front and back wheels will remain on the stage. Both of these can be used as throwable items by any character to do moderate damage and knockback. The smaller front wheel is slightly weaker than the larger back wheel. Because they are made of rubber, the wheels bounce after they hit something and can also roll around the stage. Throwing one downward will cause it to bounce several times, continuing to be an active hitbox while doing so. A tire will only hit the same person once before being re-activated by being picked up and thrown again.

By throwing his Bike, Wario can Meteor Smash. The bike will "bounce" atop the character it is thrown at and keep them down, often preventing them from making a recovery. If the spiked character keeps trying to recover and successfully recovers, it will rack up over 100% damage.

When the bike is on the stage by itself, it will eat up any projectile that comes its way. If Wario's opponent relies heavily on projectiles, Wario can merely go behind his bike and crouch for protection. A Wario skilled with the bike can pull it out, instantly make a sharp turn, thus causing Wario to fall off the bike and leaving a shield right in front of himself. Though the projectiles will eventually destroy the bike, this actually may favor Wario since he now has wheels to use.

It should be noted that any attack made on the bike counts as an attack that has landed, and as such, it will be recorded in the game's move queue. The game stores the last 9 attacks Wario has landed and decays them accordingly - it is possible to intentionally hit the bike with not very important moves about to refresh more important ones, like Down Aerial/Up Aerial/Forward Smash.