This article is about Wario's appearance in Super Smash Bros. for Nintendo 3DS and Wii U. For other uses, see Wario.

Wario (ワリオ, Wario) is a playable character in Super Smash Bros. for Nintendo 3DS/Wii U. He was first confirmed as an unlockable character by people who got the game early on September 12, 2014, and was officially revealed on October 3.

Wario currently ranks 41st on the tier list due to maintaining powerful yet versatile attacks, with many of them gaining increased range. His recovery is also good and he has a good approach option with Wario Bike. However, Wario lacks a projectile, and many of his moves also have lag.

After completing either option, you must fight and defeat Wario on WarioWare, Inc..

Afterwards, you must fight and defeat Wario on Gamer.

Despite being a high tier character in Brawl, Wario has received couple of buffs to his recovery, as increases in his power and speed, making him more able to handle multiple opponents. Some of his animations are also different. However, he also got few nerfs to balance.

Ledge Attack: Pulls himself up and thrusts both of his hands forwards while laying on the ground. 8%

Get-Up Attack: Claps with his hands on each side of his body. 7%

A living embodiment of gross, this villain hates Mario and loves money. He claims to have known Mario since childhood, but who can tell if that's true? In Smash Bros., he's a seriously agile heavyweight fighter. He can store up his trademark Wario Waft for explosive results. Did I mention he's gross?

With his Chomp special, Wario can wolf down almost anything! Hold the button, and he'll keep his mouth open. Also, if you gobble up healing items, they'll work better! When using his Wario Bike side special, you can jump off, pick it up, and throw it. If you take one thing away from this, it's JUMP OFF. Don't ride off the stage.

With his Chomp special, Wario can wolf down almost anything! If you use this to gobble up healing items, they'll work better! When using his Wario Bike side special, you can jump off, pick it up, and throw it. But please, for the love of all things garlicky, JUMP OFF BEFORE YOU RIDE OFF THE STAGE.

For most racers the finish line is the goal, but if you combine Wario with this bad boy, the game takes on a whole new meaning. And that meaning is to crash into everyone else. Behind the wheel of the Bruiser, Wario turns Mario Kart into a contact sport. 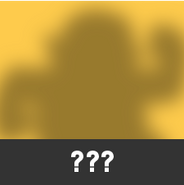 Wario as he appears in the Official Website. Note that his image can't be seen well, since he is a secret character. This was done to avoid spoilers. 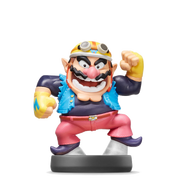 Wario Amiibo Pack
Add a photo to this gallery

Retrieved from "https://supersmashbros.fandom.com/wiki/Wario_(Super_Smash_Bros._for_Nintendo_3DS_and_Wii_U)?oldid=571286"
Community content is available under CC-BY-SA unless otherwise noted.