When Nintendo's very first handheld system, the Game Boy, launched in 1989, Gunpei Yokoi's Super Mario Land launched with it. Mario's 8-bit adventure was so successful that one year later, a sequel arrived. Super Mario Land 2: 6 Golden Coins takes place directly after the first game, when Mario comes home after defeating the evil alien Tatanga. When he arrives, he discovers that his castle has been taken over by his antagonistic, greedy counterpart, Wario, and he must retrieve the 6 Golden Coins hidden around the land to get his home back. In the final showdown, Wario was revealed to look very much like Mario himself, except fatter, slightly shorter, and with a big, bulbous nose that had a jagged, pointy mustache jutting out of it. In a three-part battle, Wario uses the same power-ups that Mario had access to throughout the game, and adds his own abilities to the mix. Wario charges at his opponent with his shoulder, and crashes to the floor butt first, which become staple moves for the character in future games. When conquered by Mario, he reverted to a "tiny" form, and escaped out the window to search for better treasures.

And search for them he did, as he landed a starring role in the third game in the series, Wario Land: Super Mario Land 3. It takes place directly after 6 Golden Coins, in which Wario sets out to earn as much gold as humanly possible, so he can buy his own castle and rub it in Mario's goody-goody face. This game played differently than the first two games, because Wario brought his own style with him. Instead of deploying acrobatics like Mario, Wario relied on his brute strength, and the ability to sport various hats that gave him different powers, such as a dragon hat that spewed fire. He also gained his own villain in this adventure, the equally greedy Captain Syrup, who captured a Genie to use for her own selfish purposes. By the end of the quest, Wario gives both Syrup and the Genie a sound thrashing, and pays the Genie to grant him his castle.

After antagonizing Mario and his friends yet again in games such as Wario's Woods and Mario and Wario, Wario continued to have three more adventures on various Game Boy platforms. In Wario Land II, Wario experiences a case of bad karma when Captain Syrup kicks him out of his own castle and steals it. Wario Land 3 involves Wario doing his first (slightly) unselfish deed, saving the inhabitants of a music box from the devious Rudy the Clown- on the condition that he gets to keep all the treasure that he earned along the way. In Wario Land 4 he does what Mario had been doing for the last decade beforehand and rescues a princess. Through these games, Wario eventually evolved from the classification of "villain" and earned the title of "anti-hero".

After all these platforming escapades, Wario, now sporting biker gear as opposed to a yellow and purple version of Mario's duds, notices the boom of the video game industry, and decides to take advantage of this craze by forming his own game company. Due to his short attention span, instead of creating a single game of reasonable length, he opts to make over two hundred games, each of them a mere five seconds long. Too short to even be called "minigames", they were dubbed "microgames". Finally, since he was too lazy to make all these games himself, he hires a handful of his fellow residents of Diamond City to do his dirty work for him, among them the feisty multi-talented Mona, and the Nintendo superfan 9-Volt. Thus, the Wario Ware franchise was born.

As if having two of his own series of games wasn't enough, Wario has also made appearances in a great number of Mario spin-offs, including the Mario Kart and Mario Party games, as well as a great plethora of Mario sports titles. In these titles, Wario is no longer evil, but more of a bumbling comic relief. His rumored brother bent on bothering Mario's brother, Luigi, is soon revealed, being named Waluigi.

Due to Wario's popularity, he has been chosen as one of the newcomers in the latest addition to the Super Smash Bros. franchise, Super Smash Bros. Brawl. Instead of being added as yet another Mario character, Wario enters the arena representing the Wario Ware franchise, as shown by his biker uniform.

As a Alternate Costume

Wario's color scheme appears as an Alternate Costume for Mario. This has no effect on gameplay whatsoever.

In Super Smash Bros. Melee, Wario was planned to be a playable character, being one of the most requested newcomers alongside Bowser and Peach, but was ultimately cut from the roster due to Sakurai not wanting to overrepresent the Mario franchise along with facing time constraints.

As a color scheme

Wario is once again represented by a costume with his colors being sported by Mario. And like before, this costume change has no effect on gameplay. However, the only changes are the M is now blue instead of yellow and the rivets and buttons are now white instead of yellow.

In addition, Wario has his own trophy in the game, unlocked by beating All-Star Mode on any difficulty level without continuing.

Wario
An old acquaintance of Mario's. His failure to seize Mario's castle has fueled Wario's desire for a palace of his own. Wario has herculean strength and can do things that even Mario can't imitate. His unexpected skills include a talent with items and the ability to assume many roles, among them a snowman, a zombie, and a bat. 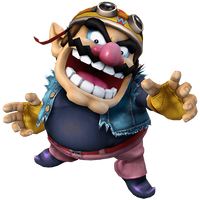 Wario debuts as a playable character in Super Smash Bros. Brawl. As a fighter, his moves and maneuvers seems to be very erratic and sometimes comical in nature, ranging from a dash where he appears to be dancing, to a fart attack that builds up in power as time passes. Mario still has a Wario costume again and Wario bears his WarioWare biker suit, as well as his original Mario-style suit from the Mario and Wario Land series. His Final Smash transforms him into Wario-Man.

Wario
Mario's self-styled rival. He loves money and gross humor. He often sets out in search of hidden treasure. His bold moves come from his superhuman strength and are completely different from Mario's moves. Aside from adventuring, he's also the chairman of game maker WarioWare, Inc. Its franchise game is WarioWare, Inc.: Mega Microgame$. 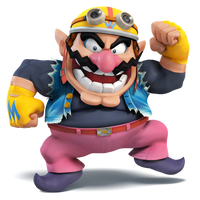 Wario returns as a playable character for Super Smash Bros. for Nintendo 3DS and Wii U, being officially confirmed on October 3rd, 2014, coinciding with the North American and European release of the 3DS version. Rather than being playable from the start, Wario is now an unlockable character, who can be unlocked by clearing 100-Man Smash for the first time or playing 20 (30 in the 3DS version) Vs. Mode matches.

Wario's moveset is mostly unchanged, with the exception of him having his up and side smash attacks replaced with different moves and can no longer fall off his bike from simply riding it or making sharp turns. Additionally, most of Wario's animations are now far more fluid, which is best noticeable with his new running animation.

Wario
A living embodiment of gross, this villain hates Mario and loves money. He claims to have known Mario since childhood, but who can tell if that's true? In Smash Bros., he's a seriously agile heavyweight fighter. He can store up his trademark Wario Waft for explosive results. Did I mention he's gross?

Wario (Alt.)
With his Chomp special, Wario can wolf down almost anything! If you use this to gobble up healing items, they'll work better! When using his Wario Bike side special, you can jump off, pick it up, and throw it. But please, for the love of all things garlicky, JUMP OFF BEFORE YOU RIDE OFF THE STAGE.

Wario + Bruiser
For most racers the finish line is the goal, but if you combine Wario with this bad boy, the game takes on a whole new meaning. And that meaning is to crash into everyone else. Behind the wheel of the Bruiser, Wario turns Mario Kart into a contact sport.