N/A
Wailord (ホエルオー Whaloh) is a Water-Type Pokémon from the Pokémon universe.

Wailord appears in Super Smash Bros. for Nintendo Wii U on the Kalos Pokémon League stage as a background character in the Flood Chamber along with Piplup, Blastoise, and Clawitzer.

NA: At a massive 47 feet 7 inches long, Wailord is the largest Pokémon found so far. It's as big as a five-story building! Also, Wailords can dive to almost 10,000 feet with only one breath of air. That's nearly two miles down and almost four times the height of the tallest modern buildings!

PAL: With a height of 14.5 metres, Wailord is the largest Pokémon discovered thus far. 14.5 metres - that's roughly the size of a five-story building! Also, Wailord can dive to a depth of 3,000 metres on only one breath. That's more than twice the height of Ben Nevis! Some remarkable stats for a remarkable Pokémon. 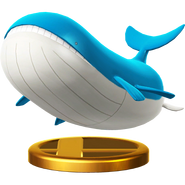