In Super Smash Bros. for Nintendo 3DS and Wii U, the move was changed so that King Dedede can only throw Gordos, and is now known as Gordo Toss.

There is also a chance to throw certain items, for example capsules or Pitfalls, instead of any of his normal minions. The chance of this occurring appears to be the same as or slightly less than the chance of throwing a Gordo. If the item frequency is set to none, Dedede can still select an item. However, if the items are individually turned off, he will not. A thrown item is functionally identical to one picked up and thrown normally (without moving the control stick), though it can, like the Dees/Doos/Gordos, be slightly angled.

If Dedede uses any attack that uses the A button when he is near an existing Waddle Dee/Doo, he'll simply pick that Waddle Dee/Doo up and throw it. This also applies for Waddle Dee/Doos that came from other Dededes.

If King Dedede is hit while doing the attack, it is interrupted, but the Dees/Doos/Gordos will appear on the stage and walk/bounce around the stage. All of the minions that can be thrown kill in Sudden Death, even the Waddle Dees, so it is a particularly useful move in that situation.

The distance and arc that the Waddle Dee/Doo follows and travels can be changed slightly. Waddle Dees/Doos/Gordos can even be Smash-thrown. The arc affects the distance as well, and can be slightly higher if the control stick is tilted up, and vice versa if tilted down. To get the longest distance, smash the control stick and try to get a high arc.

If a Waddle Dee is thrown, it does around 5% damage, and then walks around for a while, sometimes jumping and if an enemy is next to it when it does they will get hit and receive a little vertical knockback. While it is on the stage, it can absorb and block almost any other projectile attack in the game. They also prevent many attacks being used as approaches such as Captain Falcon's Raptor Boost, Ganondorf's Flame Choke, and Ike's Quick Draw. Waddle Dees cannot be properly reflected back at the Dedede that threw it with attacks such Fox's Reflector.

If a Waddle Doo is thrown, it does low around 7% damage with slightly more knockback than a Waddle Dee, and then it walks around for a while, sometimes doing its trademark beam attack which can stun an enemy in place for a few seconds. The beam attack is also a powerful attack if it fully connects, dealing out around 27% damage. Waddle Doos can also absorb and block projectiles and approaches, and cannot be properly reflected as well.

If a Gordo is thrown, it does around 23% damage and has high knockback if it hits. Gordos travel with a more horizontal trajectory than Waddle Dees/Doos when thrown, and seem to be floaty. If it misses, it will bounce once on the ground, then disappear when it touches the ground again. Unlike Waddle Dees/Doos, Gordos can be reflected back at the Dedede that threw them. 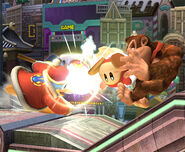 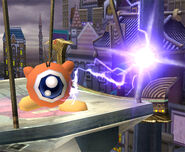 A Waddle Doo can come out occasionally.

Waddle Dees can be used to protect King Dedede from projectiles.

This is a unique move made for Super Smash Bros. Brawl, though it's not a very big stretch. Waddle Dees, Waddle Doos, and Gordos are all King Dedede's servants, and King Dedede throwing them around is not out of character at all. Credences to the theory Waddle Dees being Dedede's minions are seen in the Subspace Emissary, when a swarm of them helps him stealing the trophy-fied characters that Wario had been collecting, and Dedede being carried on a sedan chair-like throne by four Waddle Dees during his On-Screen Appearance. In Kirby Super Star Ultra's new sub-game, "Revenge of The King", King Dedede is seen walking with a large bunch of Waddle Dees, thus, reinforcing the theory of Waddle Dees being Dedede's minions. The move may also be a reference to Kirby: Squeak Squad, where Dedede throws Kirby with surprising accuracy at the Squeaks, who steal his treasure. In the anime, Dedede also has a Waddle Doo servant who he also throws around from time to time. The Gordos are also thrown by many boss, Dedede and in Kriby Air Riders, even Kirby