A large crowd of Waddle Dees, Waddle Doos and Gordos that runs across the stage for 10 seconds, trying to sweep opponents off the screen.
Waddle Dee Army is King Dedede's Final Smash in Super Smash Bros. Brawl.

He whistles, dances and plays a funky rhythm to summon a large army of Waddle Dees that run across the stage for 10 seconds, damaging anything in their way and moving much more quickly than the Waddle Dees that King Dedede normally throws in Waddle Dee Toss. The stage background and obstacles also move more slowly than usual. Waddle Doos are also included in the crowd, although they don't shoot out any electricity beam but instead give an electric shock upon contact.

The most dangerous part of this Final Smash is the fact that Gordos are also among the crowd, as they have high damage and knockback. When a Waddle Dee/Doo appears and lands on the stage, they will lift their left leg up then will either run to the left or right. When a Gordo spawns, it will drop vertically and then bounce to the left or right twice before disappearing. When a Waddle Dee/Doo runs to edge of the stage, it will sometimes jump off or run off without jumping but if it lands on a platform, it will charge again. However, if it lands on another platform it will disappear. During the Final Smash, King Dedede is immobile as he dances, and is also invincible.

The Waddle Dee Army gets its KOs by sweeping enemy players off the screen. Each Waddle Dee/Doo does a low vertical knockback and an Gordo does a strong diagonal knockback (Waddle Dee does 2%, Waddle Doo does 8% and Gordo does 15%) which, in great numbers on the ground, can rack up to a high amounts of damage (if characters are on the ground and are getting juggled by the stampede). During the Final Smash, Waddle Dees/Doos will damage upon contact. This is contrary to the Waddle Dee Toss in that Waddle Dees/Doos spawned as a result of that move do not damage except while being thrown. The Dees/Doos can still be attacked by characters or explosions, however there are so many of them it is hard to fight them off.

Most KOs dealt with this Final Smash usually results from the opponents not being able to recover very far from the stage, as the Waddle Dees and Waddle Doos are constantly attacking the enemy while he/she is off the stage, pushing him/her away from the stage while making him/her lose all jumps in the attempt to recover back. Another way for getting KOs is that the Gordos might hit a high percentage character, causing the character to fly upwards and get Star KOed.

In addition, characters will get slowly pulled towards King Dedede during his Final Smash, but only if they are on the ground. It is easier for flying or floating characters to take little damage, as well as characters with a great recovery as they only need to keep jumping and/or using their Up Special. However, it's not that easy, as the Waddle Dees/Doos and Gordos appear in midair, and if a character is under one in midair, he/she will be pushed to the ground and then get pushed off by the army on the ground. This Final Smash is less effective with large stages that have a lot of platforms as the army will be separated.

King Dedede puts his mallet away then faces the screen and whistles. The stage music is then paused for 10 seconds while a different music is played in its place. He then starts waving his left hand in a 'gimmie' style twice, does the same thing with his right, then repeats the motion with both of his hands. He does this 3 times and, finally, he puts his hands on his hips, laughs with angry eyes, and gets his mallet from behind him, ready to be controlled.

Like the Waddle Dee Toss, the Waddle Dee Army is an attack crafted specifically for Brawl,though there is a Waddle Dee army in the Kirby universe. In Kirby: Right Back at Ya!, King Dedede's castle is filled with a large army of Waddle Dees who are commanded by a single Waddle Doo. The Waddle Dees serve King Dedede's whim as well as keep the castle clean and perform guard duty but they were kicked out of the castle in Pink Collar Blues when King Dedede ordered the Domestic Servant Robot from Nightmare Enterprises as their replacement. However, he rehired them when it was then revealed that the Robot was stealing valuables from the castle to pay of Dedede's debt to Nightmare Enterprises. When the robot attacked Dedede's Castle, he brought the Waddle Dees to arms, and managed to dismantle the robot with Stone Kirby's help. It is speculated that Waddle Dees are wanderers from across the sea and will settle down in an area where they are shown hospitality to return the favor.They feature prominently in many games, and Dedede would occasionally summon some Waddle Dees in a similar (though less profuse) manner to assist him in Kirby: Squeak Squad and Kirby Mass Attack.The actual number of Waddle Dee in the castle is unknown. This issue was brought up in the episode Pink-Collar Blues, and not even Waddle Doo knows the exact number. Escargoon had counted at least 1,580 of them before he confused Kirby as a Waddle Dee and lost count, so there could be at least that many. Escargoon quickly concludes that it's impossible to count them all.

The Gordos are again common enemies in the Kirby series and will earth moth in a preset path have to be avoided by the player or thrown by a boss some times Dedede.

King Dedede's Final Smash. He whistles, and an army of Gordos, Waddle Dees, and Waddle Doos rain down and rampage, pummeling all in their way. After a bit, they'll pack it in and hit the road. Any left can be forcibly removed. They are fast and numerous, which makes it difficult to get through their ranks without taking any damage. 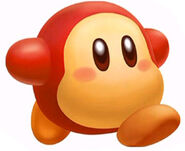