Smashpedia
Register
Don't have an account?
Sign In
Advertisement
in: Others universe, Assist Trophies, Mii Costumes,
and 4 more

Black
Vince is the player guide in the mainline games in the Art Academy series.

He joined Super Smash Bros. Ultimate as a summonable Assist Trophy. A Mii Fighter Costume based on him is also available in the base game.

Vince is the player's tutor in the Art Academy series (excluding the licensed spin-offs). He instructs the player on how to draw and paint through step-by-step tutorials and demonstrations through both the Introductory Course and the Advanced Course. After completing a painting, it will be presented for Vince to critique. Vince is shown to be an accomplished artist himself, being able to demonstrate how a particular lesson should be done as well as accurately explaining how each artist's tool and the multiple styles and techniques work.

Vince's appearance is based on Leonardo da Vinci, due to his large white beard, but is named after Vincent van Gogh. Vince is typically the only character the player interacts with in the Art Academy series, though the games also feature his dog Bacon in the loading screens or even as the subject in a lesson. In Pokémon Art Academy, it is revealed that Vince has a brother named Andy, a Pokémon Professor that illustrates Pokémon cards and teaches art to the player and his classmate/rival.

Vince's only appearance is in Trophy form exclusive to the Wii U version.

His real name is Vincent, but he prefers the shortened version. Maybe it's to help put you at ease. This great artist will teach you all sorts of techniques to help you produce a real masterpiece of your very own. Pretty nice of him, right? Once you get the hang of things, why not draw a portrait of Vince himself to say thanks?

Vince appears as a summonable Assist Trophy. He will reside in the background and will create portraits on his canvas, which then appears on opponents, obscuring them from the camera. The pictures repeatedly inflict dot damage. He will draw an additional two portraits (for a total of three) before waving goodbye to the players and disappearing. The portraits Vince can create include statues, seashells, tomatoes, birds, and cats. As he is only present in the background, he cannot be attacked or interacted with.

A costume for the Mii Swordfighter modeled after Vince is available in the base game and are already available by default. The sword it uses is his paintbrush. 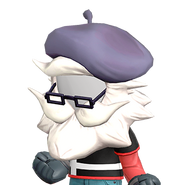 A Spirit of Vince is available in the base game. It is a Support Spirit under the Advanced class. His Spirit Battle uses the Mii Swordfighter wearing the Vince costume and is assisted by Inkling (who will frequently attack with Side Smashes, as it involves the Inkbrush) and Vince himself. The stage is PictoChat 2, as both PictoChat and Art Academy are art-themed games, and the song that plays is "Swan Lesson", a song from Art Academy.