Villager as he appears in Animal Crossing: City Folk.

The Villager is the human character in the Animal Crossing series that is controlled by the player. The Villager may be either a boy or a girl; the differences in all games are largely aesthetic and with slight variations to some dialogue whenever the conversation becomes gender specific.

The Villager's design in Super Smash Bros. for 3DS and Wii U was taken from that of Animal Crossing: City Folk and older despite the fact that the newest game of the Animal Crossing series, Animal Crossing: New Leaf, changed the design a bit with the player being taller and having longer limbs.

The Villager is the only human character seen in his/her series. The Villager is the only human "children," however, it is assumed Mom and Dad, who send letters occasionally, are also human in appearance. Players will always have an in-game "Mom" and in spite of Mom referring to childhood events and the home that the Villager once lived in, there is no indication of any real sense of backstory to the human character(s) telling why they went off to live on their own and Mom occasionally sends presents in the mail, with some gifts reflecting on the current season.

Villager appears as a background character on the Smashville stage. He also appears as a trophy known as "Animal Crossing Boy". The Villager was planned to be made playable, but was cut because Sakurai believed "he wasn't suited for battle".[Citation needed]

Animal Crossing Boy
The male player character from Animal Crossing. He feels the need to set out on his own and move into town. Chatting with neighbors is a given, but there are a ton of other things to do as well, like collecting furniture, customizing rooms, catching fish and bugs, digging up fossils, etc. He may get bee stung or fall in a pit, but he still has fun. 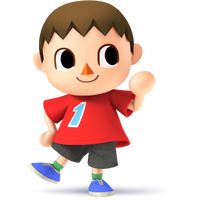 The Villager was confirmed as a playable character in Super Smash Bros. for Nintendo 3DS and Wii U in the first trailer shown for the game at E3 2013. His default design is based on his appearance in Animal Crossing: City Folk. Unlike most characters, the Villager has eight alternative costumes based upon various villager designs: four male (including the default appearance) and four female, which was first confirmed on May 12 in Miiverse.

The Villager's moveset consists of attacking with various miscellaneous objects from the Animal Crossing series, such as using a shovel to bury opponents as his Down Smash attack, firing a a pellet from a slingshot as his Forward and Back Aerial attacks, and trapping opponents inside a net for his grab. He is also capable of pocketing an item or projectile, which he can take out later for his own use.

Villager
An energetic young man from a peaceful town in Animal Crossing, he is eager to make his Smash Bros. debut! His Balloon Trip recovery lets him fly like a character from Balloon Fight. The Villager sets out to answer that age-old question: If a tree falls on the battlefield and foes are beneath it, do they get launched?

Villager (Alt.)
Just a normal girl living a normal life in a normal town—her special moves, however, are anything but. She can pocket items, projectiles, and even beams, and then pull them out at a moment's notice. Her down special lets her plant a tree, water it, and chop it down. If she leaves the tree standing, she can use the axe against foes.