Vanish is Sheik's Up Special Move. It involves her throwing a Deku Nut and vanishing into thin air. Using the Control Stick, players can determine where Sheik will reappear by tilting in a certain direction.

Vanish does not go as far as Farore's Wind, but transforming in midair is not recommended, as the transformation takes time, and barely slows her descent. The initial explosion deals damage and knockback, and is capable of KOing at around 120%, but has a noticeable start up lag. However, Sheik will be granted invincibility frames when she is about to use the Deku Nut.

The re-entry of Sheik's Vanish has a very small Push effect. This can be seen as it moves an opponent further than simply landing on them would. It has just enough push to knock someone, standing near the edge, off it, causing them to cliff-hang. This can be used downwards in the air to stop potential ground guarding. On the ground, this can be used to mess with opponents and clear space when fighting close range.

Sheik disappears in a flash of light. 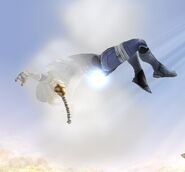 Sheik reappears above in a cloud of smoke.
Add a photo to this gallery

Gale is one of Sheik's Up Special Moves that can be used via customizations. Sheik performs an ultra-swift teleport. No attacking ability at all, but makes up for it in sheer speed.

Gale is the faster variation of Vanish. It does not deal damage but makes up for this in its great speed and decent recovery distance. The speed makes it more difficult for opponents to gimp Sheik during recoveries. Unfortunately the move does sacrifice one of Sheik's best killing attacks because the move does not deal any damage in this variation.

Abyss is one of Sheik's Up Special Moves that can be used via customizations. Sheik performs a stealthy leap that has a meteor effect on any opponents in its path.

Abyss is an attack that loses many of the benefits of Sheik's default move in exchange for a meteor-smash effect during the attack, which can help for getting kills on off-stage opponents. However, Sheik herself moves a shorter distance when the move is used, so even if an off-stage kill is successful, Sheik may not be able to make it back to the stage. The move is also much slower, taking longer to get started. Abyss deals less damage than Vanish and doesn't have nearly as much kill power, only being a remotely useful kill move when used off-stage. As she moves, the maneuver leaves a trail of blue sparkles in the direction Sheik is moving, making it easier for opponents to detect her and known where she is going to reappear, making the move easy to punish.

Abyss
Add a photo to this gallery

Sheik often vanished in The Legend of Zelda: Ocarina of Time, much to Link's bafflement. However, sometimes fire or sand concealed her disappearance while she quickly threw the Deku Nut on the ground. Impa, the only other Sheikah in the game, could perform this ability; it is one of the "Sheikah arts".

Retrieved from "https://supersmashbros.fandom.com/wiki/Vanish?oldid=572542"
Community content is available under CC-BY-SA unless otherwise noted.