If you're not going to talk about my contributions to Smashwiki or something similar, please
talk to me here or on IRC(inform me first). If you ask me to brawl or you post a random comment, it will be ignored. Also, I will most likely respond to any real comments here. 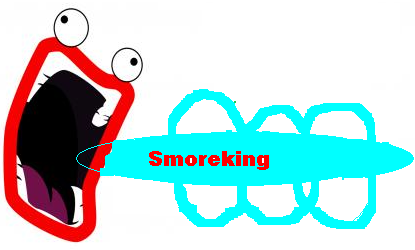 First of all, you should probably stop trying to annoy Shadowcrest by obsessing over him. :( He isn't an admin, yet. He's fully capable of defending himself in arguments and proving points (see my talk page archives). Also, how you treat mah othr boi is just plain unnecessary, as it violates both SW:YAV and SW:NPA. :( You're no better than he is for acting like a this, so get over your hatred (lol you hate him because you think there's a club for people that do) for him and apologize. RITE NAO. Blue NinjakoopaTalk 18:57, 10 January 2009 (UTC)

Ok, now I'm mad. I know you didn't just get all over The Blue Blur about meeting new people to Brawl. You've violated that policy so many times, Smoreking. "HEY I STILL NVER BRAWLED YOU" is also unacceptable. I'm really disappointed in you. Honestly, what the hell is your problem? Blue NinjakoopaTalk 19:18, 10 January 2009 (UTC)

I'm probably about to piss you off even more right now, so you might not want to read this.

You didn't piss anyone off, dude. And I don't hate you, I just hate how you think lowly of yourself but you try and act like you're better than others here. Blue NinjakoopaTalk 22:52, 10 January 2009 (UTC)

OBJECTION! I think i should be a ownage level 7! Reason. (I'm saying all this in a nice way btw cos i like you (Not in that way))

1)I have brawled xtreme and have beaten him every time

2) It took you a while to take out my meta knight and sonic! (Well, you still beat them...)

ur page just got more epic.

Are you bored? I've got nothing to do right now, and thank Guthix (heh) that school is cancelled for me today because of the snow, and upcoming rain and sleet. Wanna brawl in a few minutes? MarioGalaxyTalk 16:08, 28 January 2009 (UTC)

Because it's still policy. And the way he uses it violates policy. He's supposed to put {{Subst:whateverthenameis}}, otherwise everything has to reload or something when it gets changed.Smoreking(T) (c) 23:17, 31 January 2009 (UTC)

It's just annoying as hell when people do stupid stuff because it makes them feel special.Smoreking(T) (c) 15:34, 1 February 2009 (UTC)

... Thinks about what you have to say before you say it. Look at the top, where BNK's saying about how you archived you're page too early. And, who cares about a simple apostrophy. Anyways, why are we arguing here? You're the one who's always going on about the SW policies and here we are. Arguing away. ~Teh Blue Blur~A revolution begins. 15:58, 1 February 2009 (UTC)

You spelled "apostrophe" wrong, and I couldn't understand that first sentence. Also, arguing is not against policy, as long as no PA's get involved.Smoreking(T) (c) 16:00, 1 February 2009 (UTC)

You're both doin it rong. Grammar wars are not cruise control for cool. If this entire section had a point I missed it. thx --Shadowcrest 16:08, 1 February 2009 (UTC)

Perhaps you can help me understand why a broken link is unacceptable. I mean, it's a red link. Kind of like a blue link. -and because it's red it makes the article worse? If something can be explained more fully on another page, that's when we should link to it, right? -And if that page hasn't been written yet? -You want us to write it?? And what if we don't have the knowledge, time, or even the desire to do that? -Does that mean that something that can be explained better on another page doesn't deserve a link? Wiki's are designed so that one person alone doesn't have to do all the work. I really just don't understand the problem, so I would appreciate your input on this. Zixor (talk) 03:46, 22 December 2008 (UTC)

They just plain look bad, and clikcing on them to find an unwritten page isn't good either. SmoreKing Happy Holidays! 23:59, 23 December 2008 (UTC)

I would have to plainly disagree with you that they just plain look bad. Red is no different than blue. Just as people know that a blue link will take them to a page that has been written, they too know that a red link will take them to a page which has not (which is also spelled out when hovering over the link). "Finding" an unwritten page is a "good" opportunity to contribute. If a link belongs in an article, then it should be there; Red or blue. That's my argument. -and I'm willing to discuss it further. Zixor (talk) 03:42, 24 December 2008 (UTC)

I can see your point, but red links make an article look unprofessional, and when you click on them, they lead you to a page that doesn't exist. Chances are, red links don't need to be made, so they aren't always an amazing place to contribute.Smoreking(T) (c) 18:52, 1 February 2009 (UTC)

What exactly about a red link makes a page look unprofessional? -The fact that it appears incomplete? When is an article ever really "complete"?

Certainly there are a vast wealth of poor broken links, to pages that probably never need to, and never will be written. My concern is not for them, but for the others; the useful ones.

The proposed solution to the problem is most likely to either remove the link, or to write the page. Assuming that the page should in fact be written (which is something I doubt is often properly considered, in favor of quickly removing an "eyesore"), there are still a number of problems. -Perhaps the information has already been written in another article. Assuming that one has even considered this, one still may not be able to locate said information using this wiki's search tool. I imagine that it is actually quite a likely scenario, and that writing a new page could be a waste of time and energy, cluttering the server with unneeded articles. A broken link may be a much better solution for everyone, allowing others to help in determining the best course of action; whether that is deleting a link to a page that shouldn't exist, creating a proper link to an article where the information has already been written, writing a new article, etc.

There are many other potential advantages to broken links as well. The other, and more likely, alternative to properly witting a quality article is to quickly write a stub. There are several problems as a result of this approach. Where a broken link is clear in its absence of information, a working link to a poorly written stub is misleading, a waste of time, and may reflect even more poorly upon the viewer than the original red link.

I can definitely think of plenty more to say, but this would take me a lot of time and effort to explain. I am fully willing to do this, but for now I'll attempt to keep my arguments shorter and more concise, so that you can respond to them more fully and directly.

Broken links can be bad, as can anything, but this is entirely contextual, and they are not inherently negative. Zixor (talk) 01:09, 11 February 2009 (UTC)

Understood. Well, I'd at least ask that you not remove broken links without proper consideration. Thanks. Zixor (talk) 21:20, 18 February 2009 (UTC)

Do you approve of this? Seriously...

Listen Smore, you do not necessarily need to speak like you did on Silvie's suggestion. There are people out there who might be offended by your use of Jesus' name. Not me, but there would be others. Please refrain from doing that. GutripperSpeak 05:28, 18 February 2009 (UTC)

Look, I'm just saying. Would you like it if someone made a racist comment to you and someone tried to do something about it and someone told them to chill? I'm just sick of these extremely bad choice words when there are hundreds of alternatives. GutripperSpeak

Howdy, I'm looking to fill up my Friend Roster, so (if you want to) gimme your Friend Code and I'll add it! -Feel free to add my Wii code too, for vault data.

Instant messaging is by far the best way to schedule Brawls (as well as converse), so add my screen name (Zixor69) to your buddy list if you have an IM client. If you don't, well: we'll just have to run into each other randomly on WFC, as I've found SmashWiki alone to be an ineffective means of coordination.

I would but I have no idea how I got that signature in the first place, if you could tell me that would be very helpful. JMASTER

Just put [[User:Jay man|Jay man]] ([[User talk:Jay man|talk]]) in the signature box under Special:Preferences, and click the raw signature box. If you want a customized one, I suggest talking to Gutripper.Smoreking(T) (c) 15:38, 19 February 2009 (UTC)

Smoreking, that was my picture

Smoreking, did you know that that picture you just deleted was my picture? I just wanted it for my userpage! PurpleDarkness (talk) 01:41, 21 February 2009 (UTC)

Yeah, just not that much, lol. Get yourself acquainted with our policies before you go violating some more. If you really want want the image, I'll let you upload it here and use the direct link to put it here.Smoreking(T) (c) 21:42, 23 February 2009 (UTC)

First of all, it would help if I knew who you were. Second of all, that's still not okay. Your smasher name isn't your username, so you can't use it in your sig. Second of all, it does make sense, you just don't like it because you want to keep your sig and the policy says you can't.Smoreking(T) (c) 22:26, 24 February 2009 (UTC)

Fine, you happy now, and by the way, yours doesn't say your full user name either, so maybe YOU should change it. Jay man

Not too many people know me as Smorekingxg456, but rather Smoreking, similar to Miles.oppenheimer being knows as simply Miles. They both still gives a good reference to the full user name, so they are acceptable, but just one letter from it isn't good enough.Smoreking(T) (c) 22:47, 27 February 2009 (UTC)

SmoreKing, wanna battle with TBB and me? I tried contacting BNK so he might battle. Unknown the Hedgehog 19:13, 1 March 2009 (UTC)

I Don't know exacly how requesting for adminship works, I just want to be an admin.

I would love to become an admin. I go on the Smash wiki almost evryday. I made major edits on some sse levels, I'm very aware avout vandalism, useless pictures and needed pictures. I'm also perfectionist about the look and content of the articles. I might be the administrator you're looking for. If you want to register me as an admin, tell me in my talk page.

man dude that is so old -anonymious

Retrieved from "https://supersmashbros.fandom.com/wiki/User_talk:Smorekingxg456?oldid=256023"
Community content is available under CC-BY-SA unless otherwise noted.