Dunno what exactly call this blog, but I chose this stupid name. Okay, me and my friend were discussing some things and we thought up something interesting that could be real.

The leaked roster has a weird character placement, as we know. For example Yoshi suddenly inbetween the Mario characters and the new clones having an own spot. However what we came up with is that the leak isn't the complete roster, but at the same time it is.

Confusing? Well, (we thought) that if you buy the 3DS version of the game that will be your complete roster. However although that is the complete roster there still will be a padlock on the All-Stars mode screen. And now the funny part comes. On-disc DLC. During the time between the releases of the 3DS and Wii U version new characters might be added to the roster which will instantly be on the Wii U version (on which you have a certain way to unlock them) and when the Wii U version is out you can download the characters for free on the 3DS version. And when you have all the DLC characters on the 3DS version the padlock on All-Stars will disappear.

I know it sounds weird, but I think it is a clever idea to still be hyped for the Wii U version. And it kinda would be a troll move of Sakuai once again. So which characters can we expect as those DLC characters? Also just for making it clear. Wii U has characters as unlockable and the 3DS has them as downloadable.

UPDATE: I realized that the interview (Isabelle) leak is, although I was really convinced, fake. It says Dedede's FS stayed the same although it has been changed to Dedede-Burst. So instead the characters I added that weren't in the roster leak are: 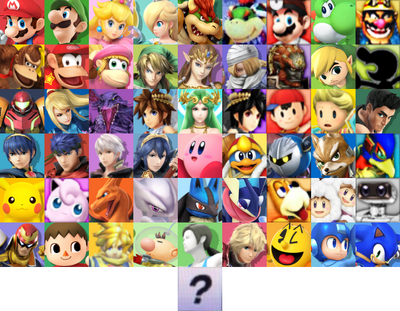 Retrieved from "https://supersmashbros.fandom.com/wiki/User_blog:Crispycol/Final_Roster_Thoughts?oldid=538446"
Community content is available under CC-BY-SA unless otherwise noted.