Hi! As most of you know, I am a massive Super Smash Bros. fan! Fortunately for me, my craving for Super Smash Bros 4. was relieved when I was finally able to pick up the Wii U version only a day after the game was released in the US! Since then, I've played it like crazy, and now I'm ready to rank the new stages in the game from worst to best!

Smash 4 Wii U brought us some gorgeous stages which are also fun to play on. Of course, the line-up is far from perfect. With a lack of a new Earthbound stage and some puzzling returning stages, (I'm looking at you, Mario Circuit), improvments can always be made. 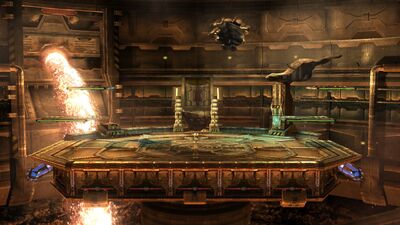 Our list starts off, unfortunately, with the only new Metroid stage in the game. This is one of those stages I knew was going to be horrid right off the bat. And, not surprisingly, that's due to one thing: Ridley.

Honestly, I hate the stage boss idea. Don't get me wrong, I'm a huge fan of game-changing hazards, but it just feels strange being attacked by an NPC who isn't one of your opponenets. This could have at least been solved by allowing stage bosses like Ridley and the Yellow Devil to be turned off. But no, which leaves Pyrosphere, (for me, anyway), as a game of dodging Ridley's attacks, instead of attacking my opponents.

Another thing, which is less signficant, is the fact that the stage is pretty basic for a Metroid stage. There's, per usual, some form of lava or acid, and the color shceme is nothing but browns and oranges. The music is nothing special, either, but that is probably just because I don't prefer Metroid tracks.

Wily Castle, for the most part, ranks this low for the same thing as Pyrosphere, being its stage boss. In this stage, the Yellow Devil appears more than often, and moves himself back and forth across the stage, and shooting lasers from his eye.

Like Ridley, this stage boss is also annoying, and though the Yellow Devil is less mobile, the stage is also a lot smaller than Pyrosphere, so it's just as distracting. Though I'm not very much of a Mega Man fan at all, I feel bad for those who were hoping for a better Mega Man stage. It's nice that he's in the game at all, but this stage isn't the most creative thing ever.

One redeeming quality of this stage, however, is the music. Mainly the Mega Man 2 Medley. I have it set so this is the only track that plays on Wily Castle, becuase it's that good.

In an installment of Smash full of gorgeous stages, this is probably as ugly as it gets. Pac-Land is a, for the most part, basic side-scrolling stage with strange, awkward 2D graphics. I would have much rather had Pac-Maze from the 3DS version than this.

Like Wily Castle, however, Pac-Land does have some redeeming music. The PAC-MAN (Club Mix) track is great, and I especially love battling with this song playing in the background. Like almost every stage in the game, Pac-Land is just fine as it is, but doesn't live up to some of the other, much greater stages in the game.

Retrieved from "https://supersmashbros.fandom.com/wiki/User_blog:Avery_FireFlame/Avery_Ranks_-_Super_Smash_Bros._4_Wii_U_Stages?oldid=466999"
Community content is available under CC-BY-SA unless otherwise noted.