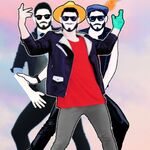 Hello! This is my userpage, i don't recommend you enter here because it's boring :v.

How did i know Smash?

Not so long story: When I was 6, I was very fan of the "Super Brawl" series, "Super Brawl" is a fighting series where it mixes different Nicktoons characters, it was a generic 1v1 fighting game like "Street Fighter" or "Mortal Kombat", whatever, One day I was watching "Super Brawl 2" videos on YouTube, when I saw on recommended a video called: "Super Brawl 64", which was a SSBB mod where only the original 12 were playable, I thought it was a "Super Brawl" game :V, so I clicked on it, as I said before, the only playable characters were the original 12, the player selected Ness and Luigi, Kirby and Yoshi as the CPU, in that time, I thought Kirby and Fox were Pokémon :V, then I saw another video called "personajes de super smash bros brawl" (super smash bros brawl characters in spanish, I'm from Nicaragua) I also thought it was a "Super Brawl" game, so I clicked on it, I was confused, i didn't recognize most of the characters. These are the characters I didn't recognize:

then I Googled "Super Smash Bros. Brawl" and i discovered it wasn't a "Super Brawl" game, intead, it was a "Super Smash Bros." game, I watched some gameplays, read a little more about the characters I didn't recognize when I watched "personajes de super smash bros. brawl" and then I discovered there were 2 more games (SSSB64 and Melee), I read about those two games, the history of the franchise, and here am i now :), with 13 years and waiting for Bandana Dee and Paper Mario to get announced ;-;.

Here i'll rank every game in the SSB series from best to worst (my opinion):

Retrieved from "https://supersmashbros.fandom.com/wiki/User:Xxdenmexx?oldid=559341"
Community content is available under CC-BY-SA unless otherwise noted.