This is an old revision of this page, as edited by The blue blur (wall | contribs) at 14:29, July 5, 2009. It may differ significantly from the current revision.

Quote Of The Day/Week

WARNING YOU ARE ABOUT TO ENTER THE HOME OF THE BLUE BLUR.

WARNING THE BLUE BLUR SAYS: "I will be less active in the Smash community, as I'm still playing Pokémon Platinum, Pokémon Mystery Dungeon EOD and the new PS3. (LittleBig Planet, tell me if you've got a PSN account ;p) I'm also having the wii taken outta mah room, so expect me to be back and training again in 1+1/2 weeks!"

ATTENTION ALL.This user is currently Offline. (Mostly on AllisBrawl.com)
ATTENTION ALL.Come here and help out on my new wiki!
Template:Smasherbeta

Template:SA BoxMy name is Jake. Also known as The blue blur. You can call me TBB, Teh blu blur or (If you're evil) Teh blue scrub! Please feel free to send me a message or invite me to a good 'ol fashioned Brawl.

I LOVE to talk about mario and sonic every day, any day. My favorite type of games are adventure games. (With the exception of brawl, a fighting game. Also my favorite game and best game i have ever played!) You may be thinking "Pft, amature 'eh?" No, i can be classed as one but im still good. Dont hesitate to brawl me though...

You can find me at AllisBrawl under "The Blue Blur".

They aren't wotking because you're leaving a line's gap Ike's Best Buddy/Bird Of Prey Don't try me!

I have done co-op missions on hard/medium by myself. (Except the one with luigi's mansion in it) Got the Tabuu with the wingz trophy!!!!

(Sorry if i forgot anyone lulz!)

Poll of the week

My favorite stages and stuff...

(2) Spear pillar (But I HATE that stupid Cressalia, and Palkia *shudders*)

For my favorite stages, I would put down many more, but I'm limiting it to 5. 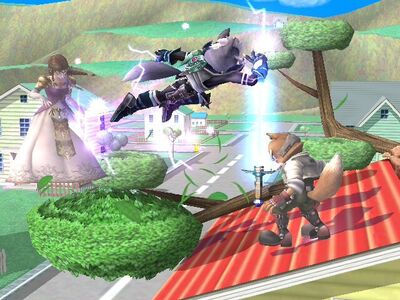 What Really Happenned in Star Wars

Zelda: If you strike me down, I shall become even more powerful.

Side A - Simalar to mario's side a, only faster.

Up A - Shadow does a backflip and kicks upwards.

Smash Side - Shadow teleports in behind them and does a spin dash back. (Similar to Double Team.)

Smash down - Same as sonic's

smash up - Same as sonic's, only it has higher knockback and there is no Vacuum.

up b- A spring jump and shadow's shoes give out fire for more suspension. - Spring jump

final smash - super shadow just a tad slower, but the a button(/ 2) Makes him teleport behind the enemy.

Grab down - BNK - BNK'S head appears and coninually says "SCRUB!" while a kitchen cloth is being rammed in the users face.

Neutral B - Chocolatepie - Slams out a piece of Chocolate Pie for 6% damage, than eats it if he connects with an opponant to heal 5% damage. Minimal knockback.

Side taunt - TBB - Runs around in a circle while shouting "TOTAL PWNAGE". (2.5 Seconds)

My created articles and stuff...

I kinda have a confession to make... I kinda use the Wiimote & Nunchuk... But I'm good (but not as good as the W&N) with the GC controller... If that amuses you...

Uhh i just got wifi, so send me a message with ur code thing and ill add u, i can play almost all weekend. Im pretty bad, but i dont really care i just want to play online.User Talk:LordGarbageMan

Retrieved from "https://supersmashbros.fandom.com/wiki/User:The_blue_blur?oldid=280397"
Community content is available under CC-BY-SA unless otherwise noted.