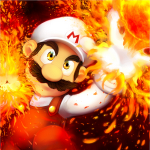 Smash Ultimate is my favorite game in the world. I main Mario, Luigi, and Dr. Mario. If you ever want to play me, hit me up and we'll play a couple matches. I'll have my friend code up soon (my Discord is Your Senpai, Iron Warrior#1774).

I wasn't nearly as good as older games as I am at Ultimate, but I still liked Smash 4 a lot during its lifespan ('til Ultimate totally screwed it over). I mained the exact same characters and still played it online forever until I got Ultimate's online mode. This game was janky and weird as all hell but I liked it anyway. These days I don't play it that much, but I still bust it out from time to time.

Brawl was easily my favorite game of all time before I discovered how awesome Smash 4 was. It's still a really good game for me. I don't play that often, but I get super nostalgic when I do play it. I main the same characters as in 4 (except Dr. Mario, obviously) and I play Snake in his place. I'm probably the best at this game because I'm not too good in the competitive scene, though I'm no casual. I think people don't give the game enough credit, because it was a really good game and the best-selling of all the games (that changed when Ultimate came out, though).

I play Melee probably about the same as I play Brawl. I like how the game plays, but I don't like the crap graphics and more limited content compared to the other two, and I think the game is highly overrated. In this game, I main the same characters as in 4 as well, but I play Doc more than Mario and Luigi in this game because he's more fun to play. This was the game that started off the series for me, so I suppose I should give it some credit.

I've never played Smash 64 or the 3DS version of Smash 4, the former because of lack of interest and the latter because it's just a shittier version of the Wii U game. I'm definitely buying SSBU when it's released, and I'll likely play the same characters as always.

I love the Mario series, and play the Zelda and Kirby games occasionally. I have no mainstream Pokemon games, but love the spin-offs (I am definitely getting Pokemon: Let's Go, Pikachu!). I also play Minecraft, Fortnite, and the Wii series among others when the mood strikes me.

For gaming, I have two Wiis, a Wii U, a Nintendo Switch, a PlayStation 3 Slim, and a SNES Classic. I've never owned a portable system of any kind, unless you count the Switch. I also use my phone (a Samsung Galaxy S9), my tablet (a Samsung Tab Active), and my PC at times.

I have a serious sailor's mouth, so if anything I say offends you, tell me and I'll try not to swear around you. I also have Asperger's syndrome (though my family and friends don't think I have it anymore), which might show up when I'm editing. I was born in 1995, and am 24 years old.

I'd like to make it known that I don't give the tiniest fuck about anything relevant. Ban me...if you can catch me first.

Retrieved from "https://supersmashbros.fandom.com/wiki/User:The_Devilish_Iron_Warrior?oldid=593812"
Community content is available under CC-BY-SA unless otherwise noted.