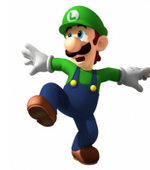 Well... i'm From utah, Me and my friend play SSBM After School a lot, I have i xbox live GamerTag GT-SuperLuigi Bros, I'm Pretty Good at SSB,SSBM And SSBB For my Age. Which I'm not Telling you... I Have A Wide Liabray of NES,SNES And N64 Games.

How to play with me On SSBB

SSB Moves And Things For Luigi.

Why Luigi Cooler Then Mario

In SSB Luigi Is Taller And Jumps Higher. But Sadly Luigi Lacks Any Traction... In SSBM He Has A New Move Plus His Traction Got Better And Has A Better Combo Then In SSB. In SSBB He Falls Slower, His Clothes Turned From A More Darker Green And Blue And He Has A Better Rate Of Not Being KO'D Because Of His Green Missle. Same In SSBM.

Though often hidden in his older brother Mario's shadow, Luigi, is in reality, very popular. Taller than Mario, Luigi also jumps higher. Although he didn't appear in Super Mario 64, in Mario Kart 64 he performed to the best of his ability. For one who always seems to be in the background, he has many fans who eagerly await his appearance. Works: Mario Bros. (NES), Super Mario Bros. 2 (NES), Mario Kart 64 (N64)-Super Smash Bros. Mario's younger twin brother. He's shy and quiet and overshadowed by his sibling, but he's actually quite talented. His jumping ability surpasses Mario's, and his all-around skills let him overcome any problem. He's a bit cowardly and really afraid of ghosts. Even so, in Luigi's Mansion, he was charged with cleaning up a whole house full of spirits.-Super Smash Brothers Brawl.Two years after his brother, Mario, made his first appearance in the Arcade classic "Donkey Kong," Luigi would make his first appearance in Mario Bros. for the arcade as the character the second player would control. His appearance is a palette swap of Mario, the difference being he's colored with green instead of red. He was named after a pizza parlor which was near Nintendo of America's headquarters called "Mario & Luigi's".

Luigi would then once again be featured in the world-famous Super Mario Bros. for the NES, which saw the two brothers traveling through the Mushroom Kingdom for the first to rescue Princess Peach (then called "Princess Toadstool") from the evil Koopa King, Bowser. Here Luigi was clad in a green shirt, white overalls and white hat compared to his usual green color scheme. In Super Mario Bros. 2 (both the U.S. and Japanese versions) he would be established as actually having a superior jumping ability to Mario, but having worse traction. However, the U.S. Version did establish that Luigi was both taller and thinner than his older brother. In Super Mario Bros. 3, Luigi once again looked no different than Mario.

Over the years, while Mario appeared in more and more games, Luigi started taking a back seat to his older brother, even being left out of some games entirely. While he appeared as the solo playable character in Mario is Missing, this was not a "true" Mario title. The most notable of these was Luigi's complete absence in the world-famous Super Mario 64 which garnered some controversy.

Retrieved from "https://supersmashbros.fandom.com/wiki/User:Luigi_Iz_Pro?oldid=302313"
Community content is available under CC-BY-SA unless otherwise noted.