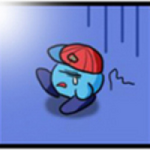 Hiyaa! My name's Kaabisteru and I come from other forums like NDB and Nintendo Of Finland. You can also call me Kirbster98.

Contributing to Smashwiki for correcting and finding correct resources of some origins of things. I love Kirby-series, and also I've been interested on obscure and forgotten games that Nintendo made and trying to play them through. My favorite game of those obscurities seems to be Japan-only RPG for SNES, Marvelous: Mouhitotsu No Takarajima. (It's the first Nintendo-game famous 3D-Zelda game producer Eiji Aonuma has worked on) I'm very versed with Nintendo, mostly with it's obscurities.

My fanside consist mainly on crossovers. I've grown up with them since I was 8, and for me they're like just as regular thing as usual art or fiction.

But the fun side is that they never, ever get boring. There are always new fandoms to cross over, and see what they concoct together. I'm constantly working on making them successful by doing effort and reading how they were great back then when they weren't treated so poorly.

When not into playing, I write fiction and sometimes fanfiction, and read alot.

(I'll be updating this once in a while)

Retrieved from "https://supersmashbros.fandom.com/wiki/User:Kaabisteru?oldid=354835"
Community content is available under CC-BY-SA unless otherwise noted.