This page contains shtuff about me that no one cares about, such as my obsession with Pikmin and the fact that you are inferior to me. You can also find me on Steam. Cafinator, of course.

Here, I'll share with you really mad bad misspellings, confusions, and nicknames of characters I've seen while in my super-secret society...

In Super Smash Brothers, I used D.K., mainly because my friends enjoyed setting the Damage Ratio up completely. However, whenever I WASN'T playing a 20 stock match with friends, I enjoyed playing as my childhood nightmare.

My only favorite item was one that needs no introduction--the Fan. It was such a powerful item, racking up damage, and killing at notably low percentages. It was almost unfair. And it was! Ahahahaha!

I only had one stage of choice. Kongo Jungle. Frankly because I am amused by loud noises.

Robin Hood, it was always fun make my friends miss their attacks when I managed to master using his Hookshot to grab a ledge. down you go, my friends, into the oblivion!

...OK, maybe it was the other way around...I mean, it is possible that I'm just fibbing, and I was the one falling into the oblivion...

I still only had one favorite item. It wasn't the hammer this time either. No, no. It was the Beam Sword! So fun just to throw at people, launching them backwards, then catch it in mid-air while my friends directed their attention towards me for my performance!

If I had one stage I'd enjoy, it'd be Corneria, and Big Blue

Here in Smash Brothers Brawl, seeing as I AM a huge fan of Pikmin, I use Mario Olimar. With the inclusion of Wifi, I can annoy people around the world, and Hawaii, with whistle spam! Try as you may, you can't stop the annoying sound, the irritating Super Armor that comes with it! The biggest breakthrough in Taunt Matches since Game and Watch's bell!

Oh, I also use THE KING, but that's not fair towards the other players.

Well, if I had to chose one--TWO....it'd be the Gooey Bomb and Smokeball. It's almost like an impossible game of hot potato.

It's a wonder how I even have friends, isn't it?

Big Blue, Corneria, and of course... the stage that everyone uses, all the time, every time...

I recently discovered a 0%-to-death combo with Olimar that actually requires no initial setup other than your opponents simply being in grabbing range. From lightweights to heavyweights, it's IMPOSSIBLE to avoid this. I've tried! It's easy to execute even in lag!

You can find the video here

Red Pikmin are my personal favorite Pikmin. They withstand and have the ability to produce fire, unlike other Pikmin. Therefor, they are clearly better, because we all know that a weapon on fire is surely more powerful than a weapon that is not...on fire.

Yellow Pikmin conduct electricity. They can flap their ears to fly, like elephants. Olimar clearly dislikes them, so he throws them higher than other Pikmin.

The most useless Pikmin. They're also pretty ugly looking. They have no advantages in combat. Also, what's worse, is that they survive in water, and therefor have a use. They are also more durable to other Pikmin, so they tend to, unfortunately, last longer.

Creepy looking. They're faster than other Pikmin, can stare into the underground.

OK, seeing as everyone is doing this, Cafinator wants to be a generic blend-in, and make a character moveset myself! Woo!

...Woo... For those who don't know, Louie is a character from Pikmin 2. Just imagine Olimar, except taller, skinnier, blonde, and dumber looking. Oh, and he also wears blue gloves. At the end of the game, Louie takes control over a Titan Dweevil and fights Olimar for unknown reasons.

A Dweevil was an enemy in the game that was like a spider, except with four legs, and could use elements to attack. There were red, yellow, blue, and purple Dweevils, and they were pretty harmless.

This all changed with Titan Dweevil, who was the Final Boss! It was aggressive, and had control over all four elements. But Olimar squished the little spider and "saved" Louie. Here, with Louie and Dweevil, Louie rides a Dweevil with the ability to control all four elements as well! I suppose you could call them a "pseudo-clone" of Olimar. 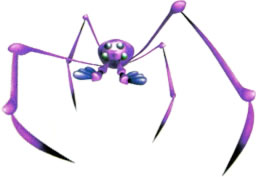 Be scarier if they weren't the size of a dime.

Side-Special: Elemental Web - Louie, atop the Dweevil, points forward, and the Dweevil fires an attack reaching about three and a half character spaces away based upon its Element. Poison does the most damage, but no knockback. Water works like Mario's water gun, except much stronger. Fire has average damage and knockback, while Electricity does minimal damage, but strong knockback. When used in mid-air, Dweevil will flip forwards while using this, making an all-around effect (but weaker than when used on the ground).

Special: Element Toss - Louie throws an object based on the Dwevile's current state. Same distance as a Waddle-Dee throw.

Water: Throws a drain pipe. High knockback, medium damage, very short range.
Electricity: Throws a lightbulb. Speedy, but weak.
Fire: Throws a fire cracker. Doesn't explode on contact, explodes eventually when it touches the ground. Low damage, high knockback.
Poison: Louie throws the comedy bomb (think of a poisonous Smokeball, but with a less range of smoke lasting only a second). Does a lot of damage, but no knockback at all.

Up-Special: Elemental Attack - Dweevil releases the element it currently has beneath itself. Electricity has long range (two character spaces) and high knockback, but low damage. Poison has a medium range (one and a half character spaces) and does a lot damage, but no knockback. Fire has an average range (one character space), and does medium damage and knockback. Water has the most range (three character spaces), and propels an opponent horizontally with the Water Gun effect, but more powerful. It takes a quarter of a second before activation, though. In the air, it shoots Dwevile upwards, and will always be the same distance (1.5x higher than an Aether, minus going straight down afterwards).

Final Smash: Elemental Release - Louie raises his arms in the air, and Dweevil fires water blobs into the air diagonally, lighting strikes Dweevil directly above it (like Pikachu), Fire is shot out from the sides at the distance of half of Final Destination (each one), and poison is released around Dweevil about a quarter of the size of Final Destination , acting like a Flower. Lasts 11 seconds.

Down Smash: Dweevil spins with all four legs sticking out.

Up Smash: Dweevil thrusts upwards, while Louie is shot into the air by a little. The move is most powerful when the opponent is hit by Dweevile thrusting upwards.

Up Tilt: Louie jumps up. Higher reach than their Up Smash.

Side Tilt: Dweevil uses its arm-like features to chop at the opponent twice. You have to press A twice, though.

Down Tilt: Louie shoots headfirst forwards, then Dweevil scoops him back up on his back.

Standard A: Dweevil chops using its front legs (one at a time), while Louie's helmet antenna swings around, causing a little extra damage (no knockback.)

Grab: Dweevil uses its front legs to pull an opponent in, then it holds its opponents using its arm-like features.

Down Throw: Louie points down, and Dweevil throws the opponent underneath it, jumps up, and lands using its sharp legs on the opponent.

Up Throw: Louie points up, and the Dweevil uses its front legs to grab the opponent from its arm-like features, and throws it upwards.

Back Throw: Louie uses his thumb to point backwards, and Dweevil throws the opponent backwards, but underneath it while it uses its current element attack, but doesn't change the knockback. From weakest damage to strongest damage, Water, Electricity, Fire, Poison.

Up-Air: Dweevil turns upsidedown and stabs its legs upwards while Louie's feet dangle, barely holding on with his hands. If Louie's feet touch the opponent, Louie will bounce off of the opponent, acting like a Footstool jump, but with the power of a spike.

Down-Air: Stomps the air, like Lucas's or Snakes down-air, but with four legs!

Air Attack: Dweevil spins, while Louie jumps up and spins as well. Dweevil will not fall downwards while using this, but only once before you have to touch the ground to do it again.

Trip: Dweevil lies on its back with its legs stuck in the air while struggling to get up, while Louie sits on the floor.

Trip Attack: Dweevil spins in place with its legs sticking out, while Louie grabs onto one of the legs and jumps back on Dwevile.

Faceplant: Dweevil lies with its belly on the ground with all legs sticking out, while Louie lies face-first.

Landing on back: See Trip.

Edge Attack: Louie swings Dweevil onto the platform (this is the attack), then jumps up and lands back on Dwevile.

100% Edge Attack: Dweevil struggles a bit, then boosts up and lands on the platform with Louie on its back.

Shield: Dweevil squats, Louie puts both hands on his helmet.

Dodgeroll: Louie rolls towards the screen, Dweevil rolls away from the screen, then reunite.

Crouch: Dweevil squats and Louie ducks down while holding his helmet's antenna.

Jump: Dweevil squats then jumps up. Double jump is the Dwevile spinning while Louie holds his helmet.

Dash: Dweevil runs, Louie holds on with his feet swinging off of the Dwevile.

Louie pulls his helmet's antenna, then lets it go.

Dweevil jumps up, causing Louie to bounce a little.

Dweevil twists to look behind itself.

Down Taunt: Louie flips backwards to Dweevil's back legs, then Dweevil flips Louie back onto itself using its back legs.

Side Taunt: Dweevil faces the screen and glows from Red, Purple, Blue, and Yellow (the color is starts with depends on his current element.)

Down Taunt: Louie rubs his helmet, making a squeaking sound, then Dweevil jumps up for Louie to pay attention.

Louie jumps up and down on Dweevil, Dweevil gets annoyed and tosses Louie off, Louie's head gets stuck in the ground.

Louie sits on the ground, then Dweevil pops up from beneath Louie, shooting Louie into the air. Dwevile looks around (Louie doesn't drop back down if you keep watching the victory screen).

I recently saw crabs migrating to Southern California (or, as you may call it, "SoCal"). I decided to videotape my experience; watching them ignore all items in their path until they reached their final destination.

"...Wavedashing was accidentally discovered when..."

"...A glitch is technological "mistake" of sorts that can alter gameplay..."

Another section from "Wavedashing" article

"...Contrary to popular belief, wavedashing is not a glitch..."

Retrieved from "https://supersmashbros.fandom.com/wiki/User:Cafinator?oldid=226905"
Community content is available under CC-BY-SA unless otherwise noted.