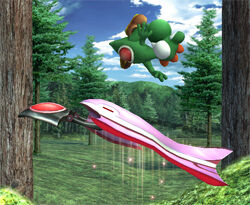 The Trowlon is an enemy in Super Smash Bros. Brawl's Subspace Emissary mode. It lifts the player and flies away to the top of the screen with him.

An enemy that, despite a mechanized look, is made up of a soft, specialized material that allows for smooth, undulating movement and flight. A Trowlon will not attack directly but will instead slip under the player and suddenly ascend. It will try to put players on its back and carry them off the screen.

Retrieved from "https://supersmashbros.fandom.com/wiki/Trowlon?oldid=109052"
Community content is available under CC-BY-SA unless otherwise noted.