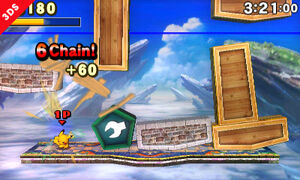 Trophy Rush is a trophy-snagging minigame in Super Smash Bros. for Nintendo 3DS and Wii U. There is also a fever rush after breaking enough blocks where you get Multiple Trophies, Custom Parts, and Coins thrown at you like in the Super Smash Bros. Brawl minigame, Coin Launcher.

In Trophy Rush, the player enters a number of coins to increase game time. The more coins spent, the more time he or she will have in the game. The amount of time can range from 30 seconds to 2 minutes and 30 seconds. This means the player must pay at least 180G to play, with 900G providing the maximum available time.

The player must break boxes in order to fill a meter. Once the meter is full, the game enters fever mode in which pentagonal boxes with coins, trophies, and custom parts in most of them constantly rain from the sky, and the player will need to break as many as they can before the fever mode wears off. If too many crates stack up, the player has 5 seconds to clear the stack; otherwise, the platform disappears and you will fall. Getting KO'd will cost you 15 seconds the first time, 10 seconds the second time, and 5 seconds for all deaths after the second. If the player stays in the same position for too long, a warning sign alerts the player that a lightning ball will fall from the top of the screen at that particular area. The lightning ball will inflict 30% and great knockback to the player if they fail to dodge or block it, as well as destroying all blocks it comes in contact with. It cannot be reflected, asorbed, or pocketed; but it can be countered.

The longer the game lasts, the more crates that will drop. There are different types of crates to break.

Wooden blocks are the most common type of box. They don't fill the meter very efficiently, but they stack up quickly, making them very dangerous if not destroyed promptly.

Stone walls are the second most common type of crate. They take some power to break, and they fill up the meter more efficiently than the wooden blocks.

Gold Blocks are golden boxes that appear semi-rarely. They fill up the meter most efficiently and are usually very helpful. It withstands twice the power of a regular wooden crate, but once destroyed, gives 4x the amount a regular crate wood give, towards a fever rush

Timed Bombs appear more commonly than the Gold Blocks, but less commonly than stone walls. They are set on a timer and if not pushed off the edge soon enough, they will explode, potentially damaging the player and pushing any crate within the blast radius. They cause 25% of damage.

Cannons are large blocks that have an opening on one side. If they are not broken or if they are pushed off the stage, they fire a laser from the side with the opening, causing 20% of damage to players stuck in its blast.

The Coin Block is the most common of the three reward blocks. They are maroon colored pentagon shaped blocks with a picture of a single gold coin in the center. Breaking it only gives you one peice of gold, but there are usually 15-30 in each fever rush.

The Trophy Block is another one of the three reward blocks. They are pink blocks with a gold outline and a white trophy symbol. Upon destruction of it, you recieve a random trophy. There are usually 3-10 trophy blocks per fever rush.

Custom Part Blocks are the rarest blocks in Trophy Rush; there is usually going to only be one, if any, in each fever rush. They appear as green blocks with a image of a white wrench head. Forcefully dismantling one earns you a custom part.

Retrieved from "https://supersmashbros.fandom.com/wiki/Trophy_Rush?oldid=526684"
Community content is available under CC-BY-SA unless otherwise noted.