In Brawl, the animation for the transformation takes significantly longer, but Zelda/Sheik is invincible during the majority of the transformation. This is most likely due to a software limitation (The larger disc that the Wii uses having a longer average load time than the Game Cube's smaller discs), not an intentional change, as the transformation time is the same when Zelda/Sheik's reaction time is slowed down by an item, assist trophy, or practice mode. While making the transformation more punishable, it is possible to use this move to dodge Final Smashes such as Cook Kirby; and Tabuu's Off Waves. 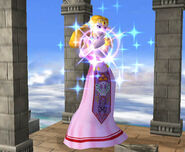 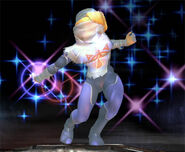 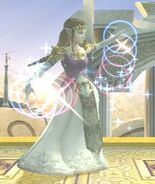 In Brawl, as the form is changing, the disc must load in order for the process to be complete.

Zelda is finally transformed into Sheik, her alter ego.
Add a photo to this gallery

The move is based on The Legend of Zelda: Ocarina of Time where Sheik reveals to have been Zelda in disguise all along. Using the power of the Triforce of Wisdom, she is able to physically change her appearance, allowing her to disguise herself by changing her clothing, hair, eye, and skin color. The sound that plays when Zelda/Sheik transform is the traditional Zelda "secret revealed" and "puzzle solved" chime.

Shiek is also introduced In Subspace emissionary when Snake tells Peach and Zelda to stay in a certain area .

A generally unknown trick, if the game is paused while the move is being used, the game will continue loading whichever form is being transformed into. When the game is unpaused, the transformation will automatically complete. This same trick can also be used on Castle Siege between scenarios to instantly go to the next place. If replay data containing either of these happening is saved, the game will freeze in-reply to load, but the music and any sound effects will continue as normal. This technique is useless in any tournament that bans in-match pausing. Also, when not on Wifi, it seems that pressing the Shield button can shorten the transformation time.

Retrieved from "https://supersmashbros.fandom.com/wiki/Transform?oldid=561704"
Community content is available under CC-BY-SA unless otherwise noted.