Smashpedia
Register
Don't have an account?
Sign In
Advertisement
in: Attacks, Special Attacks, Up Special Moves,
and 3 more

Tornado Hold is one of Mega Man's Up Special Moves that can be used via Customization. Mega Man drops a fan on the ground that pushes anyone caught in the cyclone upwards.

Tornado Hold damages enemies on the way up and it's possible to use aerial attacks at the height of the recovery, making it very good for combos. Using the move in midair causes the fan to fall as it pushes Mega Man up. It can be used on opponents to delay their recoveries, give more time to use an aerial attack, or off stage to help opponents get back to the stage.

However, Tornado Hold is below average in terms of recovery. Mega Man doesn't get much height out of it, and though it is the only variation of Mega Man's Up Special that directly deals damage, it only deals 5% damage. It can set up a few aerial combos if opponents are caught in the tornado, which can add on to the damage. However, the falling tornado can be useful for damaging off-stage opponents that are trying to recover, making it a valuable edge-guarding tool since Mega Man can just drop it off the edge of the stage.

In Mega Man 8, Mega Man receives this weapon from Tengu Man. It works the same way as its original appearance, launching Mega Man upward and hitting enemies. It is also Clown Man's weakness, tangling the latter's long arms so that he can't attack for a short period of time. It has also appeared in Marvel vs. Capcom and its sequel, along with the Leaf Shield, the Mega Buster, and the Mega Upper. 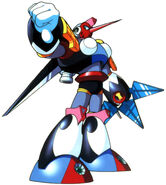