This article is about Toon Link's appearance in Super Smash Bros. for Nintendo 3DS and Wii U. For other uses, see Toon Link.

Sachi Matsumoto
Toon Link (トゥーンリンク, Toon Link) is a returning starter in Super Smash Bros. for Nintendo 3DS and Wii U representing the Legend of Zelda universe. He was revealed on September 26, 2013, the same day The Legend of Zelda: The Wind Waker HD came out in Japan.

He currently ranks 23rd on the tier list due to his above average run speed, great projectile game, and kill set-ups. He is hindered from being much higher because of a poor grab game, light weight, and very punishable grab.

Much like Link, Toon Link has a strong Zoning game, with a resilient Turtle stance. With a good variety of melee and ranged attacks, Toon Link can effectively control the space near him, interrupting opponents and punishing them accordingly. He is nimble on his feet and can set up combos effectively with his projectiles. All his attacks have disjointed hitboxes, giving him advantage over opponents. In addition, he has a solid defense in the form of his Hylian Shield, which can block most projectiles; being the only character other than Link capable of doing such feat.

One of his most versatile attacks is his Grab Aerial, that can start many combos and setups. While having lower range than Link's, it is equally fast, and can combo into most of his Tilts at low percentages. He is also notable for being able to set up many combos using his projectiles, with all his Special Attacks having great utility. Hero's Bow is great for long range pressure and establishing a safe distance between opponents, as well frustrate characters who struggle at approaching.

Toon Link has many weaknesses, however. He relies too much on his Special Attacks and Grab Aerials for setting up combos, with few of his ground attacks other than Up Tilt being able to combo properly. His Aerials also have moderate ending lag, which prevents them from combo'ing into each other. Much like Link, his recovery is very easy to gimp, even with the improvements on his recovery. He also lacks proper killing moves, mostly relying on his Forward Smash and Back Throw.

Overall, Toon Link is a good alternative for players who want to focus on zoning game. While he lacks the power of his counterpart, he is overall faster and can rack up damage very quickly. Players, however, must be aware of his weaknesses and be patient to land the right killing moves.

Toon Link has received buffs and nerfs, but was overall slightly nerfed. Toon Link's mobility has been improved, and Boomerang and Bomb have more utility. His grab game in particular has been improved, being longer and having less lag. However, Toon Link has been weakened in both his power and combo game, with smash attacks in particular having less damage output. His down and back aerials, both solid options from Brawl, are now difficult spacing options. Most importantly, Toon Link must rely more on wall jumping and tether recovery, as Spin Attack gains less height.

In terms of appearance, his design remains roughly the same as in Brawl, but receiving a saturation treatment as the rest of the cast. His bright colors, textures and proportions now resemble more his incarnation from Wind Waker HD. He also has more facial expressions, most of them based on his poses when taking selfies with the Pictbox in Wind Waker HD.

This cartoonish version of Link is how he appeared in The Legend of Zelda: The Wind Waker and a few other titles. In Smash Bros., he uses moves much like his older, taller counterpart. His small size gives him extra speed, though, so take advantage of that to send your foes flying.

Toon Link's Bomb move doesn't deal much damage, but the blast radius is pretty big. His bombs can be thrown in all directions, damaging or distracting your foes. Also, his up special Spin Attack keeps him airborne longer than Link's version. For some launching power, use the side smash attack.

Link is well known for his green clothing, a look he has sported throughout time. But in Spirit Tracks, he dons a blue uniform with a red cap instead. The cap is decorated with a dove, the symbol of the Royal Engineers. Playing the Song of Birds will call a dove to roost!

You might feel sorry for this version of Link, what with him living a life on fixed rails rather than exploring the seas or the skies. But, like the smoke from his train, that feeling will soon disappear when you see that after leaving Aboda Village, the young engineer's quest to restore the Spirit Tracks is filled with adventure. 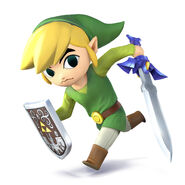 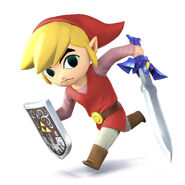 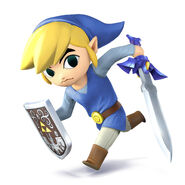 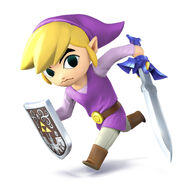 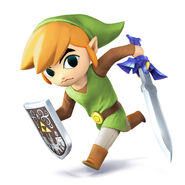 Link wears his set for alternity uniforn, with white pants, and light-brown boots. 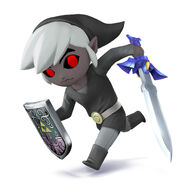 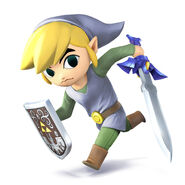 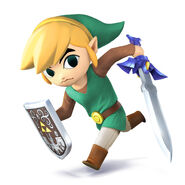 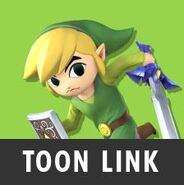 Toon Link inflicting a hard hit on the opponent hence the red sparks that are appearing.

Another day, another bomb

Toon Link along with Palutena and Bayonetta

Toon Link along with Ryu.