Smashpedia
Register
Don't have an account?
Sign In
Advertisement
in: The Legend of Zelda universe, Characters, Trophies (SSBB),
and 19 more

Official artwork of Toon Link in The Legend Of Zelda: The Wind Waker HD

In The Legend of Zelda: The Wind Waker, set hundreds of years after Ocarina of Time, the gods have flooded Hyrule, creating the Great Sea, encompassing the highest mountaintops of Hyrule. At the beginning of the game, Link's younger sister Aryll is captured by Helmaroc King, a giant masked bird controlled by the game's primary antagonist Ganondorf, the latter of which is searching for Princess Zelda. Link travels the Great Sea to rescue his sister and defeat the Helmaroc King; his quest intertwining with that of The King of Red Lions, who, after many trials, gives Link the title "Hero of Winds." Using the Wind Waker, a magical conductor's baton, he borrows the power of the gods to aid him in his quest. Link must eventually reassemble the Triforce of Courage to give him the power to fight Ganondorf. After Ganondorf's defeat, Hyrule drowns under the sea forever.

Sometime after, at the end of The Wind Waker, Link and Tetra sail for new lands. Their journeys are where The Legend of Zelda: The Phantom Hourglass picks up. As the crew searches for new lands, they run into the Ghost Ship, which, when boarded, suddenly turns Tetra to stone, and teleports Link to the World of the Ocean King, where Tetra is imprisoned by Bellum. Link finds the Phantom Hourglass (an item that protects him from the life-draining magic coming from the Temple of the Ocean King), and carries it with him as he, Ciela, a fairy, and Linebeck, a cowardly and greedy captain, journey to various islands that bring him one step closer to defeating Bellum. Eventually, he claims the Phantom Sword and defeats Bellum, saving Tetra. Oshus, the Ocean King, is returned to his original form, and teleports Link and Tetra back to their own realm. Tetra's crew claims everything to be a dream (as only 10 minutes passed when they supposedly fell asleep, according to them), but Link still has the empty hourglass, and they see Linebeck's ship over at the horizon.

After the events of these games, Link and Tetra continued on to find a new land, which they settled in and called Hyrule. One-hundred years later, several references would be made to the Hero of Winds in The Legend of Zelda: Spirit Tracks. 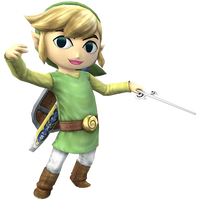 Before the development of Brawl, Toon Link was intended to be excluded and Young Link was meant to be retained as a playable character. The release of The Wind Waker in 2002, however, caused Young Link to be replaced by Toon Link.

Toon Link's moves are virtually the same as the standard Link, but there are some differences. One of the most obvious is his Down Special Move, Bomb, which emits an explosion that uses the art style from The Wind Waker and Phantom Hourglass. The difference is not strictly cosmetic, as the large smoke puff has a greater range but less power.

His Standard Special Move, Hero's Bow, is also different. The arrows shot fly slower, but travels farther than Link's arrows. His Up Special Move, Spin-Attack, is not significantly different, with the exception of his posture while spinning. Instead, its main difference is that it traps foes within, hitting multiple times before launching them away. Unlike Link, Toon Link retains the Boomerang as his Side Special Move and as such, it provides noticeable differences: it does not pull opponents like Link's Gale Boomerang does, and supplies more control when throwing it.

Toon Link, like Young Link in Melee, also has the ability to wall jump. While Link's jumping and falling styles are heavier and faster, Toon Link's jumps are larger and have a floaty quality to them. Toon Link is faster than Link, and Toon Link's Dash Attack is less powerful in proportion. Additionally, Toon Link's Up Smash attack is only one slash while Link's is three. When Toon Link's Down Aerial is performed, he will fly straight downwards with his sword similar to many other stall-then-fall attacks. Interestingly, this move pushes characters and items away, and slides down slopes like Kirby's Stone. Additionally, all of Link's kick attacks, such as his Neutral Aerial and Back Aerial, have been replaced with additional sword slashes to compensate for Toon Link's tiny legs.

Toon Link has a trophy that is awarded each time the Classic Mode is completed with Toon Link on any difficulty. See Triforce Slash for the trophy description of Toon Link's Final Smash.

Toon Link
Link as he appeared in The Wind Waker and Phantom Hourglass, with big eyes and an expressive face. He lived peacefully on Outset Island until a bird captured his little sister, and he came to her rescue. In The Wind Waker, he had to crawl, press up to walls, and the like. His green clothes were worn on his 12th birthday and are the lucky outfit of the hero of legend.

Outset Link
Link in his traditional clothing. He wears a blue, V-neck, long-sleeved top with a shrimp pattern, coordinated with slender orange pants. It makes you think that, even on his home, Outset Island, Link was quite the fashion leader, and suggests that he may have changed into his green hero's clothing somewhat grudgingly. 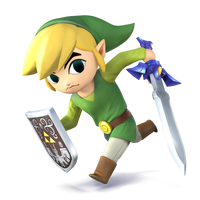 Toon Link returns as a playable character in Super Smash Bros. for Nintendo 3DS and Wii U, now being a starter character rather than an unlockable character. While his moveset remains almost unchanged from Brawl, his color scheme has been made brighter and more cartoonish to closely resemble his appearance in The Legend of Zelda: The Wind Waker HD.

The Spirit Tracks incarnation of Link also appears on the Spirit Train stage as a background character, although he will be replaced by Alfonzo if either Toon Link or Link are participating in the battle.

Toon Link
This cartoonish version of Link is how he appeared in The Legend of Zelda: Wind Waker and a few other titles. In Smash Bros., he uses moves much like his older, taller counterpart. His small size gives him extra speed, though, so take advantage of that to send your foes flying.

Toon Link (Alt.)
Toon Link's Bomb move doesn't deal much damage, but the blast radius is pretty big. His bombs can be thrown in all directions, damaging or distracting your foes. Also, his up special Spin Attack keeps him airborne longer than Link's version. For some launching power, use the side smash attack.

Engineer Link
Link is well known for his green clothing, a look he has sported throughout time. But in Spirit Tracks, he dons a blue uniform with a red cap instead. The cap is decorated with a dove, the symbol of the Royal Engineers. Playing the Song of Birds will call a dove to roost!

Link (Spirit Tracks)
You might feel sorry for this version of Link, what with him living a life on fixed rails rather than exploring the seas or the skies. But, like the smoke from his train, that feeling will soon disappear when you see that after leaving Aboda Village, the young engineer's quest to restore the Spirit Tracks is filled with adventure.