Uncommon
Togepi (Japanese: トゲピー, Togepī, Togepy) is a fictional creature in the Pokémon media franchise. Togepi is a tiny egg-shaped creature covered in a half-hatched egg shell with red and blue patterns on it.

Togepi's Metronome is made up of five attacks that are chosen randomly. The attacks are:

Togepi features as a collectible trophy, unlocked as one of the 100+ trophies that can be collected randomly during normal play, such as in the Trophy Lottery and throughout the various Single-player regular matches. It reads as follows:

Togepi
These adorable Spike Ball Pokemon hatch from eggs given out by Professor Elm's assistant. It's impossible to predict which ability a Togepi will call upon when it uses its Metronome move, so you'd better be ready! (Pokemon Gold & Silver 10/00)

Togepi returns to the series using the random effects it used in Melee. However, it no longer uses Night Shade, but Smokescreen. However, the effect of blackening the screen is the same.

Togepi
A Spike Ball Pokémon. It's said that its shell is filled with joy, and a proverb asserts that if you can get a sleeping Togepi to stand up, you will gain happiness. Togepi can lower its opponent's attack power using Charm. Once it has become friends with its Trainer, Togepi evolves into Togetic.

NA: This Fairy-type Pokémon grows by feeding off the happiness, fun, and kindness of others. It's always filled with joy! In Smash Bros., Togepi uses the unpredictable Metronome move on foes. This move can cause drowsiness, damaging-flower growth, or stage darkness.

PAL: A Fairy-type Pokémon that's always sunny side up! It can siphon positive energy from people and spread it across the world. Its Metronome attack can have a wide variety of effects. Maybe it'll plunge the stage into darkness. Maybe it'll plant damage-dealing seeds on fighters' heads. Whatever it does, Togepi will leave fighters scrambling. 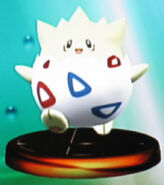 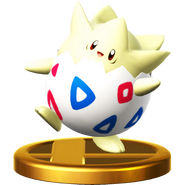 Togepi's Trophy in Super Smash Bros for Wii U.
Community content is available under CC-BY-SA unless otherwise noted.
Advertisement