This article is about Peach's Standard Special Move. For information about the character, see Toad.

In Super Smash Bros. Melee and Brawl, Toad is Peach's Standard Special Move. Peach pulls Toad out of hammerspace, and holds him out in front of her. This can be used as a shield that cancels (but not reflects) projectiles, or a multi-hit attack.

Upon being hit, Toad will emit a shower of spores to do damage. Unlike Marth or Ike's Counter which does more damage when damaged while using counter move, Peach's Toad move does the same damage (18%) and knockback no matter how much damage or knockback the attack would have dealt to Peach. Some gameplay videos seem to indicate that Toad's Brawl incarnation has much more knockback and range with his counter-attack, and now has true KO potential.

The move can be bit difficult to use, as there is quite a bit of delay before Peach can block attacks, especially compared to other counter/reflecting moves like Fox's Reflector or Marth's Counter.

The move is unique to the Super Smash Bros. series, but the Toads are Peach's loyal servants in the Mario series, as well as the Mushroom Kingdom's dominant species. 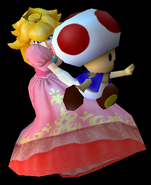 Peach using Toad in Melee
Add a photo to this gallery

Retrieved from "https://supersmashbros.fandom.com/wiki/Toad_(Move)?oldid=370930"
Community content is available under CC-BY-SA unless otherwise noted.