Toad as he appears in Super Mario Run

Toads (キノピオ, Kinopio) are a recurring species from the Super Mario franchise. One particular Toad serves as the sidekick to Mario, Luigi, and Princess Peach.

Peach and Daisy use Toad in their Neutral Special Moves. Outside of that, a Mii Fighter Costume modeled after Toad is available in Super Smash Bros. for Nintendo 3DS and Wii U and Super Smash Bros. Ultimate (available as DLC in the former game).

Toads are a peaceful race of mushroom-like humans and the dominant species of the Mushroom Kingdom. While a majority of the Toad population live their own lives in their own homes in many towns and cities, most work as the loyal servants of Princess Peach. One particular Toad (identified by his white bulbous head with red spots, blue vest, and white pants) has attained far more fame due to being playable in several titles, making him the de facto representative of the Toad race. This Toad is often characterized as a very cheerful, optimistic, and humble, but can often be cowardice at times. Though above all, he has an unwavering loyalty to Peach and the Mario Bros.

Toads first appeared in Super Mario Bros., usually appearing at the end of Castles to tell Mario that Peach "is in another castle" after he beats one of Bowser's decoys. The sole Toad representative himself debuts in Super Mario Bros. 2 as one of the four playable characters alongside Mario, Luigi, and Peach; his stats are characterized as being the fastest and the strongest but with the weakest jump. These stats would later be carried over for his appearance in Super Mario 3D World, once again as one of the five playable characters (the fifth being Rosalina). Toad has also been playable in New Super Mario Bros. Wii, New Super Mario Bros. U, and Super Mario Maker 2 (as does a second Toad in the former two), though interestingly, none of the unique stats are carried over to those games. In more recent mainline titles, Toads have also been the proprietors of Toad Houses - special locations on the map that host bonus games with Power-Ups as rewards. In Super Mario Odyssey, Toads are once again merchants, this time running two branches of the Crazy Cap store.

Toad himself also appears in the spin-off titles. He is one of the few characters to be playable in every game in the Mario Kart series, usually as the lightest racer in the game. It is also in Mario Kart: Double Dash!! that introduces his sister, Toadette. Toad is the host of the first four Mario Party games, and later becomes a playable character himself from Mario Party 5 onwards. Toad also serves as a referee and adjudicator in the Mario Tennis, Mario Golf, and Mario & Sonic at the Olympic Games series; despite his referee role, certain other sports games has Toad participating, namely the Mario Strikers series and Mario Sports Mix. The general Toad populace often show up as spectators in the sports titles, but have also been more commonly seen in the Paper Mario series. Toad himself gets his own starring role in the NES puzzle game Wario's Woods; in it, Toad is asked by the forest sprites to save their home after Wario takes it over.

Outside of games, another particular Toad named Kinopio-kun serves as the mascot of Nintendo's account on the Asian social media app LINE. He is a special Toad with a bright green cap with white spots and a green vest. Users could "directly message" Kinopio-kun with pre-written messages. Toad himself appears in LINE's animated stickers alongside the rest of the Mario cast. Kinopio-kun was later phased out by Nintendo on May 21, 2021.

Toad appears as a part of Peach's Neutral Special Move. Peach will pull Toad out from thin air and hold him in front of her as a shield, working as a Counterattack; if Toad is struck, he will spew out spores.

Toad can be seen in the background of the first level of Adventure Mode. He first appears running behind the area with the Multi-Man battle against several Yoshis, and again behind the finish line.

Toad, Peach's longtime servant, first showed off his strength in Super Mario Bros. 2, then proved to be an agile driver in Super Mario Kart. There are many Toads in Peach's castle and across the Mushroom Kingdom, and although they look similar, they have varied natures. Not the best of guards, Toad must often be rescued.

Toad was the center of hoax that was first discovered on a Geocities site in November 2002, stating that he could be unlocked by achieving a perfect score during the credits mini-game after clearing Classic Mode, Adventure Mode, or All-Star Mode; afterwards, the player must then clear Adventure Mode again (with a requirement of "easily defeating" the Yoshis). Several "screenshots" were also provided, which in actuality were just Toad's appearances from Adventure Mode and Peach's Neutral Special manipulated into pictures of a paused match.

Toad is once again Peach's Neutral Special Move. Toad can also be playable within the unlockable Masterpiece, Super Mario Bros. 2, once the player makes Peach lose all her lives in it.

One of the servants at Peach's Castle in the Mushroom Kingdom. Toads give off a strong sense of peace. Most feature white heads with red polka dots, but there are other colors as well. Toad's incredible uprooting speed in Super Mario Bros. 2 is unrivaled, adding to the rumor of his superhuman strength... however out of place it might seem.

Toad returns as a part of Peach's Neutral Special Move yet again.

A costume for the Mii Brawler modeled after Toad was made available as a part of the Wave 4 batch of DLC costumes. The vest's color can be changed. For female Miis, a shirt is added to cover up the chest.

A race of charming mushrooms that dwell in the Mushroom Kingdom, they prefer to be called Toads... Come to think of it, that's an odd name. It's not like they're very good jumpers. Captain Toad can't jump at all! What's that? ToadSTOOLS? ...That makes more sense.

A charming tribe of mushroom people from the Mushroom Kingdom. "Toad" seems like a bit of an odd name for them, though. Like...they may be small, and some are green, but there's nothing really frog-like about them. Captain Toad can't even jump! Oh. Wait. Hold on a sec. "Toadstools"...Nooow it makes sense!

Though its appearance calls to mind an infant's toy, the Quacker is really a fully functional motorbike with some serious acceleration. That's because its frame is so light, you might expect it to float on water like a swan boat! But that lightness also makes it easy for other karts to push around, so try to stay out of trouble.

Despite just looking like a child's plaything, the Quacker is a fully-functional motorbike with serious acceleration and a frame so light you'd think it'd be able to float on water like a swan boat! That lightness makes it easy for other karts to push it around, though, so avoid drawing attention to yourself as you slip by your rivals.

Toad returns yet again as Peach's Neutral Special Move, though is now shared with her Echo Fighter, Daisy. The move's animation has also been changed, now showing Toad willfully guarding the girls. Toad also attacks for their Pummel and Throws.

The Mii Fighter Costume modeled after Toad also returns, this time as part of the base game. The outfit is available by default, but the hat must be purchased separately at the in-game Shop for 900G. 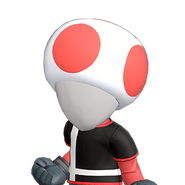 The Toad outfit (female and male)

A Spirit of Toad is available in the base game. It is a Primary Grab Spirit under the Advanced class. His Spirit Battle uses a Mii Brawler wearing the Toad costume and will frequently perform Suplex (a reference to the plucking ability from Super Mario Bros. 2). Only Super Mushrooms will spawn. The stage is Princess Peach's Castle and the song that plays is "Plucky Pass Beginnings" (a reference to Captain Toad). It can be enhanced to Level 99, which will then transform it to Captain Toad, a Primary Grab Spirit under the Ace class.

Toad also appears as part of the artwork for the Cheep Charger Spirit. It is a Primary Grab Spirit under the Novice class. The Spirit Battle uses Peach (due to having Toad in her moveset), who has increased speed and will frequently grab the player (another reference to plucking). The stage is Mario Circuit and the song that plays is "Mushroom Gorge", due to the Kart debuting in Mario Kart Wii.