Fire Emblem: Shadow Dragon and the Blade of Light (Ankoku Ryū to Hikari no Tsurugi)

Ikue Ōtani
Tiki is a character from the Fire Emblem universe.

Tiki is a manakete making her debut in the original Fire Emblem: Shadow Dragon and the Blade of Light as a child. In her infancy, she was sealed asleep by Naga before her death to prevent her from degenerating along with the rest of the dragonkin. She was later awakened by the fire dragon Bantu, who travelled the world with her, and during this time she befriended and allied with the Hero-King Marth. She also appears in the sequel to the original game, Fire Emblem: Mystery of the Emblem. Thousands of years later, Tiki appears as an adult in Fire Emblem Awakening as Naga's oracle and assists Marth's descendants, Chrom and Lucina.

Tiki's child and adult forms both appear in the spinoff Fire Emblem Heroes, while her child form appears in two other spinoffs: Tokyo Mirage Sessions ♯FE and Fire Emblem Warriors.

Tiki appears as a trophy in Super Smash Bros. for

Nintendo 3DS, in her Awakening design; the trophy also includes her dragon form. Additionally, one of Lucina's alternate costumes is based on Tiki's colour scheme.

Tiki resides in Valm as the Voice of the Divine Dragon. You might be surprised to learn that she is 3,000 years old. As befitting one from the Divine Dragon tribe, she has a very calm demeanor...but every so often, she'll show her youthful spirit 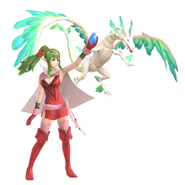 Tiki holding her dragonstone on Summit.