Thunder Jolt (でんげき, Dengeki?, lit. "Electric Attack") is Pikachu and Pichu's Neutral Special Move. Thunder Jolt is fairly unique for a projectile attack in that it hugs the ground it travels on, bouncing up and down as it moves forward (often over obstacles). When used in the air, a ball of electricity is launched that falls diagonally until it hits a solid object, where it assumes the normal arc form. Like its other specials, Thunder Jolt damages Pichu upon use, inflicting 1% damage each time.

This move is also good for spamming heavy characters and fast falling ones like Ike and Fox. 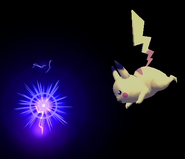 In Super Smash Bros. 3DS/Wii U, Thunder Jolt can be customized into Thunder Wave or Thunder Shock.

Thunder Wave will paralyze opponents that it hits, but does less damage. This move can potentially set up an infinite combo.

Thunder Shock will travel strictly horizontally, but will trigger a small blast as it disappears.

Unlike most other attacks Pokémon use in the Super Smash Bros. games, there has never been an attack named Thunder Jolt in any Pokémon video game. Thunder Jolt was, however, present on the original Pikachu card as one of the many moves invented for the Pokémon Trading Card Game. The name of the move in the Smash Bros. games likely arose either from the popularity of the trading cards at the time of Super Smash Bros. or from a mistranslation of "Thunderbolt," the name of a standard Pikachu move in the RPGs.

The name itself does specifically come from the TCG.